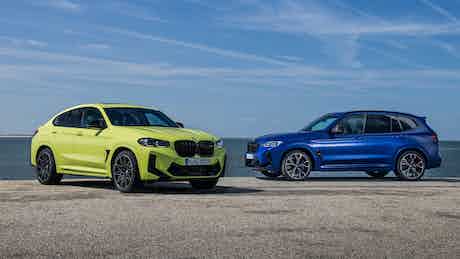 The BMW X3 M and X4 M high-performance SUVs get a little quicker and boast more tech. Read on for full details.

Updated versions of the BMW X3 M and X4 M have been revealed, with the high-performance SUVs quicker than before with more tech to boot.

They square up to alternatives such as the Mercedes-AMG GLC 63 and Audi SQ5, and are set to arrive on UK roads from September 2021.

Like the rest of the range, both the X3 M and X4 M get fresh styling tweaks. Most notable is the larger new ‘kidney’ grille, which is made up of a single piece rather than being split in two, along with a restyled front bumper.

Both cars get a redesigned rear diffuser, with the X3 M also getting new taillights. There’s a fresh set of black-tinted chrome exhaust pipes as well.

You can have both the X3 M and X4 M in new Marina Bay Blue or Sao Paulo Yellow paint finishes as well, which are reserved for M cars exclusively.

There’s no obvious change to the 3.0-litre twin-turbocharged straight-six engine powering the BMW X3 M and X4 M. It still produces 510hp and 650Nm of torque in Competition guise — the only form you’ll be able to buy in the UK.

That said, both the X3 M and X4 M Competition are 0.3 seconds quicker to 60mph than before — both will complete the sprint in 3.8 seconds — suggesting some improvements have been made, although BMW isn’t saying what exactly…

As before, both the X3 M and X4 M Competition cars are limited to 155mph.

The BMW X3 M and X4 M get some upgrades to the interior in line with the recent tweaks BMW’ made to the standard X3 and X4. Most of note is a streamlined centre console, which brings climate controls into one sleeker row rather than a split mass of buttons.

You’ll get two 12.3-inch displays too — one replacing the analogue dials and gauges — along with the central infotainment system.

There’s more carbon fibre dotted all over the shop as well, and the choice of three leather interior options.

Deliveries will start in September if you get your order in now.

Can’t wait until then? Check out the latest BMW deals available through carwow or compare the top 10 best suvs on sale now.