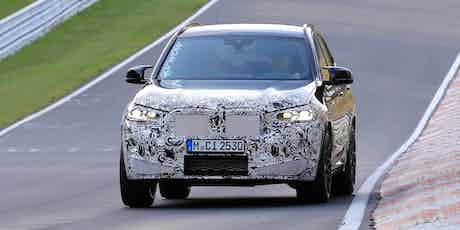 A camouflaged prototype of the 2022 BMW X3 M has been spotted testing at the Nurburgring race circuit in Germany. Read on for full details.

The current BMW X3 M only rolled into dealerships last year, but BMW has already decided it could do with a going-over to help it keep pace with the Mercedes-AMG GLC 63 and Jaguar F-Pace SVR. The prototype pictured here was spotted undergoing high-speed testing on the Nurburgring race circuit in Germany.

As you can see in the images here, only the prototype’s front and rear ends are covered in heavy camouflage. So, it’s safe to assume that the rest of the BMW X3 M’s bodywork will remain unchanged.

Though the camouflage is too heavy to draw any concrete conclusions, it looks as though the ‘kidney’ grilles are larger and a little closer together – fortunately not on the same gargantuan scale as the new BMW M3 and M4. There may be a more aggressive bumper with bigger air intakes, too. The headlights are edged in camouflage, suggesting their design has been altered, as well.

The facelifted BMW 5-Series, launched earlier this, features slightly slimmer headlights with a new daytime running light pattern, so it’s possible the X3 M will follow suit. The rear, too, will likely feature redesigned lights, possibly alongside a new number plate surround and a tweaked bumper.

No images have emerged of the new X3 M’s interior, but not a great deal is expected to change. The seats may be lifted from the new BMW M3 and M4 and the infotainment graphics could be revamped for 2022.

As the name suggests, the BMW X3 M is powered by the same twin-turbo, 3.0-litre, six-cylinder engine as the M3 and M4. In its current guise, the X3 M’s engine produces 473hp in standard form and 503hp in the X3 M Competition. Both produce 600Nm of torque.

The horsepower outputs match those of the equivalent version of the latest M3, launched earlier this year. The new M3 Competition, though, has 650Nm of torque, so it’s possible the new X3 M Competition’s engine will be uprated to deliver the same figure.

Both versions of the current BMW X3 M are four-wheel drive and come with an eight-speed automatic gearbox. Most of the power is sent to the rear wheels most of the time, which helps it feel more like a sportscar and less like a big, heavy SUV to drive. This isn’t likely to change for the new 2022 model.

Likewise, performance figures won’t change significantly, either. Both the standard X3 M and X3 M Competition cover the 0-60mph sprint in around four seconds; the X3 M has a limited top speed of 155mph, raised to 174mph in the X3 M Competition.

BMW doesn’t bother selling the standard version of the current X3 M in the UK – only the X3 M Competition. That’s likely to be the case when the updated version goes on sale. The current car costs £79,000 and there isn’t likely to be much of a price hike – if any – when the new model is launched sometime late in 2021.