News Nissan gives us a micro glimpse of future Micra

Nissan gives us a micro glimpse of future Micra 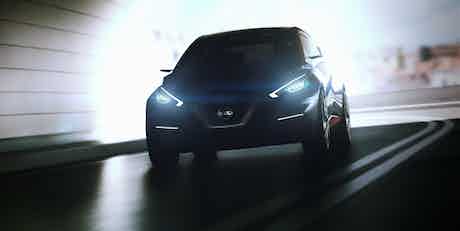 Nissan has revealed one solitary photo of its new Sway concept – previewing the upcoming Micra supermini. The car is due to be shown at the Geneva Motor Show in March 2015 so we’ll have more conclusive details of the new supermini closer to the show date.

Nissan has been on something of a roll recently with the international success of the Juke crossover and the Qashqai SUV. The company claims the same radical design thinking and product planning has gone into the development of the Sway.

The single picture shows a front end dominated by the trapezoid grille popularised by the Juke and Qashqai. LED daytime running lights either side of it and give the car a wider, more planted stance than its predecessor.

Although it’s not completely clear from the photo, the sides seem to be heavily sculpted to make the car look dynamic. LED headlights feature with light bars – but these might be too prohibitively expensive to make production.

If this is to be the new Micra then Nissan certainly needs to throw the kitchen sink at it. Where the third-generation Micra found success, thanks to its friendly styling and original ad campaign, its successor was maligned for losing the fun character of its predecessor.

Nissan has revealed nothing else apart from this photo so we’ll update you as more details arrive. In the meantime, take a look at the cars the new Micra will need to beat – the Ford Fiesta, Volkswagen Polo and Renault Clio.