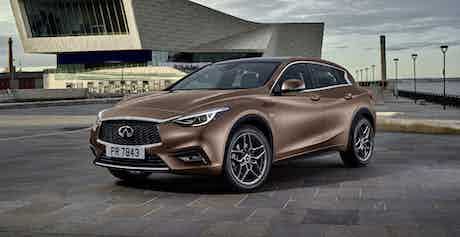 Infiniti has released an image of its brand new Q30 hatchback ahead of its launch at September’s Frankfurt Motor Show. Aimed at the premium end of the hatchback market, the Q30 will be in direct rivalry with the Audi A3, BMW 1 Series and the Mercedes A-Class – the car on which the Q30 is based.

Alongside the Q30, the brand will release a QX30 – a crossover version of the Q30. Again, it uses a Mercedes platform and will rival the BMW X1 and Audi Q3. Its enlarged interior will provide more passenger and cargo space along with a raised driving position.

Engines are yet to be confirmed but it seems likely that the Q30 and QX30 will use the 2.1-litre diesel engines from the Mercedes range. More efficient versions could make use of the 1.6-litre diesel from Renault and Nissan’s ranges.

An impressive aspect of the production Q30 is it seems to have stuck closely to the styling of the concept car we saw back in 2013. It keeps the curvaceous lines, elegant swooping angles and even the bright copper paintwork.

Although we’ve not seen an official image of the interior, it’s expected to follow a similar styling direction to the exterior.

It’ll be officially revealed at the Frankfurt Motor Show and deliveries could begin as early as 2016. Prices are unconfirmed but it could stick to a similar range as the Mercedes A-Class – costing from around £20,000, rising to just over £30,000.

Spec up your ideal next car in our car configurator to see how much money carwow could help you save. For more options, head over to our deals page or, if you’re still struggling over what car you’d like, check out our car chooser.