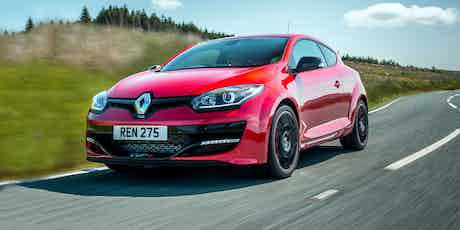 Renault has announced two new Meganes will be added to its Renaultsport lineup. The 275 Cup-S and the 275 Nav replace the outgoing 265 and gain improvements to the engine and interior equipment.

Costing from £23,935 for the entry level Cup-S, the new cars represent good value when you consider there’s no price increase over the current 265 model.

In addition to the 10hp increase, the new cars now comply with Euro 6 emissions standards which means better fuel consumption and less CO2 emissions. Both models also get Renaultsport’s improved chassis and suspension. All this results in a 0-62mph time of six seconds and a top speed of 158mph.

The Cup-S is the more stripped out variant, with more equipment being found in Nav. The latter includes climate control, automatic headlights and wipers, and a seven-inch infotainment system. It also includes Renault’s TomTom navigation and traffic system, and a 12-month traffic subscription.

The Nav version gets the unique option to have a full carbon grey leather interior with electrically adjustable heated front seats. If you do fancy taking it on a track day, both new models will also be available with leather Recaro front seats.

It’s available to order now and the first cars are expected to be delivered in November.

Read our full, aggregated review of the Renault Megane Renaultsport to see what the UK’s motoring press makes of it. For more options, head over to our deals page or, if you’re still struggling to pick your next car, check out our car chooser.