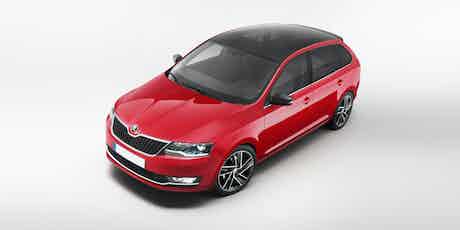 Skoda’s released details on its upcoming facelifts for both the Rapid hatchback and Rapid Spaceback estate before they make their public debuts at the 2017 Geneva Motor Show in March. Both will be offered with new kit, including a new engine, when they go on sale.

The differences between the old and facelifted Skoda Rapid are certainly subtle.

The foglights are now slightly slimmer and have been mounted closer to the top of the lowermost air intake while the space previously occupied by the indicators below the headlights is now left blank.

The headlights themselves have been tweaked with new innards and a set of built-in daytime running lights while Rapid Sport models now feature black side skirts to match the modified rear diffuser and minuscule bootlid-mounted spoiler.

Inside, the doors and air vents have been re-trimmed and the heating controls have been replaced by slightly more modern items. The infotainment system now sits in a gloss black insert in the centre console while a similar trim piece stretches between the air vents on the dashboard.

Skoda now offers a wireless hotspot feature on Rapid and Rapid Spaceback models alongside an upgraded sat-nav system and an app for your smartphone to monitor whether the windows are open or if the fuel tank is full. More usefully, this feature can help guide you back to your Skoda in a crowded carpark or enable you to input sat nav destinations using your phone.

Apple CarPlay and Android Auto are offered as optional extras while an emergency call function can contact the emergency services in the event of a serious accident.

The facelifted Rapid will also come with the option of numerous up-to-date safety systems including automatic emergency braking and driver fatigue detection while electronic stability control and tyre pressure monitoring are now fitted as standard.

Possibly the biggest change is the new 1.0-litre turbocharged petrol engine that’ll be offered on both Rapid and Rapid Spaceback models. It should help deliver improved performance and economy over the old 1.2-litre unit. The old model’s selection of 1.4 and 1.6-litre petrol and diesel engines will still be offered, too.

Skoda hasn’t announced how much the new Rapid and Rapid Spaceback will cost but we expect they’ll set you back around £14,000 to £20,000 across the range – approximately the same as the outgoing car.