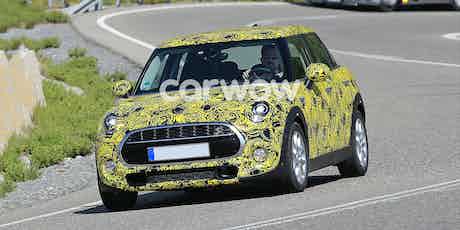 Mini is plotting a mid-life facelift for its popular hatchback models. Heavy camouflage on this 5-door version makes it hard to tell what’s new but we’re only expecting modest changes for this Fiat 500 and DS3 rival. It could make its debut at the 2017 Frankfurt Motor Show in September.

If you don’t want to wait for the updated model, click ‘login’ on our homepage to sign up and configure a new car or browse our extensive range of new, nearly new, ex-demo and pre-reg stock cars.

Buyers were already sold on its updated retro styling so this hasn’t changed much – although the camouflage makes it hard to tell for sure. The most obvious change is at the back where the brakelights appear to have undergone a redesign – the LED elements within them seem to be shaped like a Union flag although we’ll have to wait until the covers come off to see whether this looks naff or not.

At the front, you can make out what could be redesigned elements inside the headlights with oval-shaped centre sections framed by metallic dots. Beyond that, the wide grille, black window pillars and rounded wing mirrors remain unchanged. The car in these shots wears the optional John Cooper Works styling pack with rectangular air intakes in the lower front bumper and a grille surrounding the exhausts.

A snatched photo of the new car’s interior again demonstrates how little has changed rather than what’s new. In fact, the only change we could spot was a redesigned fuel gauge – it’s now a more useful indicator than the series of illuminated bars that the current model uses.

The central infotainment screen is the same as the current model and is still controlled by a rotary dial in the centre of the car, while a manual handbrake remains behind it. A piece of cloth covers the upper glovebox suggesting it might’ve seen a small redesign although it’s not clear from this photo.

Minis are known for their sporty handling and the new model is unlikely to have changed anything under the skin. That means you’ll get the same super-responsive steering, snappy gearshift and firm suspension that resists body roll admirably without being too harsh in day-to-day use.

Considering this update is so small, prices should stay the same as the current model. This means the three-door version will cost from around £14,500, the five-door from around £15,250 and the Convertible and Clubman around £19,250 and £19,500 respectively. Mini hasn’t stated when the new model will go on sale but we’re expecting it to be shown at the 2017 Frankfurt Motor Show in September and appear on sale shortly afterwards.

The Mini Hatchback and Convertible will get a mid-life ‘mini’ facelift – as shown by these latest spy shots. Changes will include a new headlight and brake light design, an updated infotainment system and a few safety upgrades.

Prototypes spotted testing wear a slither of camouflage on the car’s front – covering the car’s nose and headlights. This suggests the Mini might borrow some front styling features from the recently released Countryman – which boasted new angular headlights and a flatter ‘nose’ than its predecessor. Along with the redesigned headlights, the car’s brake lights – camouflaged in spy shots – could feature subtle changes, too.

We expect the Mini to only undergo subtle changes on the inside – possibly offering more interior trim options, making the Mini even more customisable. The brand could fit the latest version of parent company BMW’s iDrive infotainment system – it could use gesture control as seen on the BMW 7 Series, a system where the car’s infotainment functions can be controlled by waving your hand in mid-air.

The Mini’s engines should get some light updates to boost both performance and fuel economy. A sporty limited-run John Cooper Works GP model could appear later in the car’s lifetime but we don’t expect to see that model until 2019 as the model approaches the end of its production run.

Expect the facelifted to make its debut at the 2017 Frankfurt Motor Show in September 2017. It should be priced similarly to the current model – entry-level Hatchbacks could cost around £14,500 while the higher-spec Convertible will be priced around £19,000.