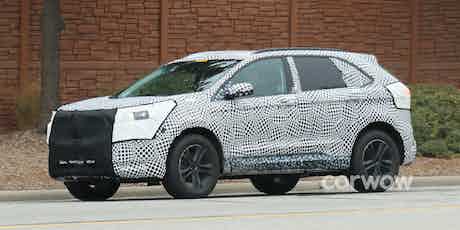 The facelifted Ford Edge has been spotted testing ahead of a 2018 release date. Read on for all the information

The next version of the Ford Edge has been spotted testing near the company’s factory in Michigan. The changes look to be fairly minor, with revisions to the lights and bumpers seeming to account for most of the updates.

See how much you can save on a current Ford Edge on our deals page. Click ‘login’ in the top-right-hand corner to configure a brand new car or browse our extensive range of pre-reg, ex-demo and nearly new cars.

The Edge is a handsome and slightly Americanised alternative to other mainstream SUVs, and it looks like Ford hasn’t altered the styling much for this new version – the main changes appear to be focused on the lights and bumpers, but the camouflage cladding hides the finer details of the changes.

The Edge’s blocky shape and sloping window line will stay, as will the sloped rear windscreen and body-coloured rear spoiler. Like with the front of the car, it’s likely that the rear will only be slightly altered, with new brake lights and more heavily sculpted bumpers.

The interior is likely to feel more premium than the current model and could borrow luxury touches from the posh Vignale model. It should look very similar, but the materials may be plusher and the infotainment system will likely be upgraded. One thing the Edge isn’t lacking is space, and passenger space and boot space will probably be unchanged. After all, with 602 litres of space with the seats up and a massive 1,847 litres seats down, you’d probably need a van if you want any more space.

The revised Edge will continue to offer a 2.0-litre diesel engine that comes in two versions – a 180hp manual and a 210hp automatic. At the moment, both achieve 48mpg, but the facelift could bring improvements to performance and fuel economy. American buyers can choose from two more engines, but we’re unlikely to get them in the UK. A nine-speed automatic gearbox is likely to replace the unit used in the higher-powered model.

It’s likely that we’ll see the facelifted Edge without camouflage in the first half of 2018, with it being able to be ordered from mid-2018. Prices shouldn’t increase too much from the current model, which is priced at £34,295 for the manual and £36,545 for the automatic before carwow discount.