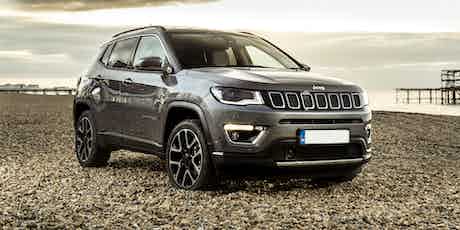 The Jeep Compass hits UK showrooms today, starting from £22,995 for the entry-level model. It’ll go toe-to-toe with the popular Skoda Karoq, VW Tiguan and SEAT Ateca, and will offer four-wheel-drive on almost all trim and engine levels.

See how much you could save on the Jeep range through carwow. Click ‘login’ in the top-right-hand corner to sign up and configure a brand-new car or browse our extensive range of pre-reg, nearly-new, ex-demo, new and used cars.

While the front doesn’t push the envelope in terms of styling, the rear makes more of an effort, thanks to LED brake light units and a chrome strip slicing downwards from the contrasting roof and under the narrow rear windscreen. It looks tougher and more like a traditional 4×4 than the Karoq and Tiguan, which could appeal if you’re looking for a butch SUV that’s bigger than the Jeep Renegade.

The interior will feel more premium than the cheaper Renegade, with extra soft-touch materials and a much larger infotainment system in the middle of the centre console. It’ll be a touchscreen unit, controlling the navigation, media and smartphone mirroring. Half-leather seats will be an option, and the Jeep will offer a range of off-roading tech that other mid-size SUVs won’t have.

A six-speed manual will be available alongside a nine-speed automatic gearbox. The top-spec Trailhawk version includes a separate low-range gearbox, more ground clearance, skid plates, hill descent and a ‘Rock’ driving mode to be able to traverse most types of off-road terrain.

The Jeep Compass is on sale in the UK now, with deliveries starting from February 2018. The entry-level car costs £22,995 while the range-topping Trailhawk – available from summer 2018 – will cost £35,595 before options.