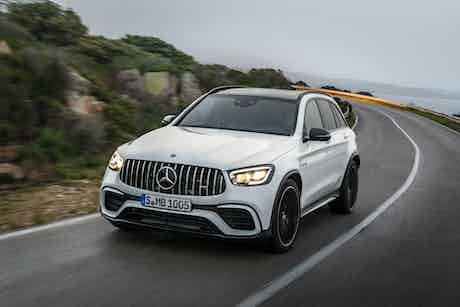 Mercedes has revealed updated versions of the Mercedes-AMG GLC 63 and GLC 63 Coupe. Read on for everything you need to know.

Nothing much substantial has changed about the Mercedes-AMG GLC 63 in this facelift but – with up to 510hp, 700Nm of torque, 0-62mph in 3.8 seconds and a top speed of more than 170mph – in terms of performance at least, nothing much needed to change.

So think of this as more of a freshen up. As a result, both the GLC 63 and GLC Coupe 63 get new headlights and new tail lights, new optional 21-inch alloy wheels, redesigned trapezoidal headlights and new paint shade called Graphite Grey Metallic.

Inside, you can now have your GLC63 with new magma grey/black upholstery with yellow stitching and you get the latest version of Mercedes MBUX infotainment system. It understands spoken word commands like an Amazon Alexa, so long as you start your request with the phrase ‘Hey Mercedes…’ Along with the standard voice activation, the new infotainment system is also available with optional gesture controls. So you can carry out a variety of commands by gesturing in thin air. For example, spinning your index finger in a clockwise motion turns up the stereo volume while spinning it the opposite way turns it down.

The new AMG steering wheel is another option that comes as standard on S models. It has touch controls that you can use to scroll through various functions on the car’s infotainment screen.

Mechanical updates are even more limited but all models now get an electronically locking differential as standard – for smokey burnouts out of corners – and a new Slippy mode in the car’s drive select which sets the car up for icy road conditions. S models now also come as standard with the AMG Driver’s Package as standard to lift the car’s top speed from 167 to 174mph.

The new model goes on sale at the end of the month with prices set to stay close to the current model, which starts from £70,000.