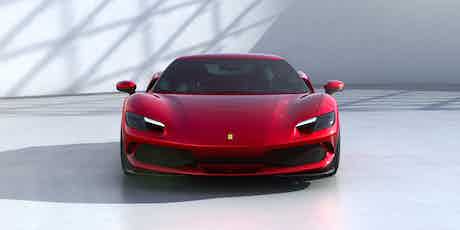 Ferrari’s first new V6-powered car since 1974 has been revealed, with the 296 GTB featuring plug-in hybrid power too. Read on for full details.

Its six-cylinder unit is linked up to a plug-in hybrid system to produce 830hp, with the 296 GTB going up against the McLaren Artura in the electrified supercar stakes.

It’s like someone used a shrink ray of the SF90 Stradale for the new Ferrari 296 GTB.

It has quite a clean, flat front end with thin horizontal-set headlights, like the larger SF90, sitting above a wide grille.

The side of the 296 GTB is pretty uncluttered too, with little in the way of creases and vents except for a large intake to feed air into the engine.

At the back, the current Ferrari trend of squared twin tail lights carries on but with one LED stretching through both rather than the outlines being illuminated. There’s a functional carbon fibre diffuser too, with one large exhaust exit sitting just above the centre of it.

Hiding away at a standstill is an active rear wing, which adds an additional 100kg of downforce when deployed.

The cabin of the Ferrari 296 GTB takes on a pretty minimalist approach, with a rather uncluttered dashboard that’s devoid of buttons.

There isn’t even a central infotainment system, rather with media and nav functions housed in the digital driver’s display. You can opt for a screen on the passenger side too, which displays revs, speed and current gear.

It’s a pretty typical Ferrari affair for the steering wheel as well. The three-point unit has some haptic controls for media functions, though most eye-catching is the big manettino dial for selecting the driving mode.

Powering the Ferrari 296 GTB is a 2.9-litre V6 engine linked up to a plug-in hybrid setup, producing 830hp and delivered to the rear wheels through an eight-speed automatic gearbox.

Oh and thanks to its hybrid system, you’ll be able to cover 15 miles of electric-only driving if you so wish.

Part of that is down to dropping two cylinders, but also other tweaks including a wheelbase that’s 50mm shorter than the F8. This apparently improves handling, which should be backed up by a new version of Ferrari’s ‘Side Slip Control’ traction system.

Just like the SF90 Stradale, an Assetto Fiorano package is available for the Ferrari 296 GTB.

As well as that new livery you’re looking at, it gets a host of weight-saving measures to help improve its performance.

These include some new carbon fibre trim elements and redesigned panels, plus shock absorbers derived from Ferrari’s GT racing programmes. You can opt for Michelin Pilot Sport Cup 2 R tyres for even more grip as well.

Despite competing in a similar segment to the F8 Tributo, the Ferrari 296 GTB doesn’t replace its petrol-only counterpart — rather serving as an alternative alongside it.

Expect to see first examples arriving in the UK early next year, with prices starting around £230,000.