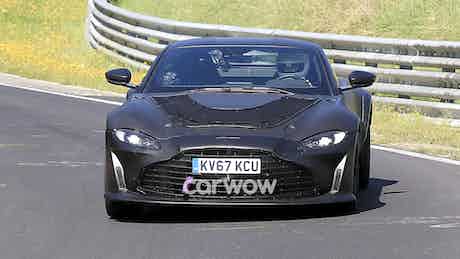 An unusual-looking Aston Martin Vantage has been spotted testing, and it’s thought to be a V12-powered RS variant. Read on for everything known so far.

An Aston Martin Vantage sporting some major bodywork modifications has been seen testing at the Nürburgring, and it’s thought to be a new range-topping version.

It’s thought this is a test mule for an upcoming Vantage RS, which will be powered by a V12 engine and take on some performance-enhancing chassis upgrades.

While it is clear that this is no ordinary Aston Martin Vantage, there’s no camouflage to try and hide it. This makes it pretty easy to spot the more aggressive bodywork and flared arches, though it’s likely these are all prototype parts with the car’s final design to be altered from what you see here.

A narrow extension to the integrated rear spoiler and centrally-mounted twin exhausts (as opposed to the quad exhaust layout on current models) are further indications that this is not just a minor styling update but a racier version.

A few of the spy shots show a glimpse of the interior, but aside from the familiar flat-bottomed steering wheel and infotainment screen set into the dashboard, there is no way to tell how different the cabin will be.

You should expect racy bucket seats, some RS logos liberally applied to the sills, seats and centre console and perhaps even an optional roll cage as found in the Porsche GT3 RS.

All current Vantage models use a Mercedes-AMG tuned twin-turbo V8, producing up to 527hp in the Vantage F1 edition.

It looks like this new RS model will be fitted with Aston’s own 5.2-litre twin-turbo V12 as used in the DB11 and DBS, though. The extensively modified bonnet with its numerous air intakes is clearly designed to keep things cool when pressing on.

In some guises, this V12 produces up to 715hp — and would bring some serious performance in the lighter Vantage bodyshell. It’s unlikely to be in full tune here though, rather with an output closer to 600hp and 700hp.

You can expect a big improvement in the 3.6 second 0-62mph time and 195mph top end of the ‘regular’ V8 Vantage regardless.

Shoehorning its biggest V12 into its smallest model is not exactly new to Aston Martin, it did exactly this with the previous-generation Vantage. However, this time we expect it will not be making the Vantage V12 available with a manual transmission, rather sticking with the eight-speed automatic fitted to the rest of the range.

No official details have been revealed of this new Vantage derivative, though an official announcement could be made later this year with production to starting in 2022.

The current Vantage range starts at just over £123,000 for a V8 coupe before options. As with the top-spec Mercedes-AMG GT R, the V12 Vantage RS will command a hefty premium compared with other variants, likely starting closer to the £160,000 mark.