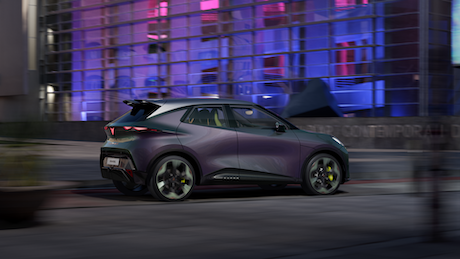 The new Cupra UrbanRebel concept has been revealed, and it’s an all-electric supermini. Read on for all you need to know.

The Cupra UrbanRebel concept is a small electric supermini, similar in size to the Seat Ibiza and Skoda Fabia, and it’s a first glance at what future electric cars from the brand will look like.

It’ll also share parts from small EVs coming from Volkswagen and Skoda, and it’s due to go on sale in 2025.

Back in 2021, Cupra revealed the UrbanRebel, and it was one of their most outlandish designs ever. Although losing the insanely big rear wing, the new UrbanRebel concept has the massive front grille and hunkered down proportions of a purpose-built racing car.

While the UrbanRebel won’t go on sale in this form, the firm has revealed a toned-down version which draws inspiration from the original car.

You can see that this concept shares a similar design at the front, albeit with less of the racy elements. The grille and front splitter are much less dramatic on the new UrbanRebel concept, however there are still some large air intakes giving it a sporty look.

Looking at the rear, while the wing has been toned down it’s still pretty prominent on the road-going version. you can also see a chunky diffuser making an appearance lower down. The tail lamps are slim LED units, and there’s a light-up Cupra logo in the centre.

The side of the car is strewn with bold creases and angles, giving it a muscular look for a small supermini.

The Cupra UrbanRebel concept is powered by a single motor on the front wheels which puts out 234hp, and can accelerate from 0-60mph in 6.9 seconds. This is likely shared with the Volkswagen ID3 and Cupra Born.

As for batteries, the new car may be one of the first to use the Volkswagen Group’s new ‘Unified Cell’ tech that’ll be introduced in 2023 and aims to cut battery-unit cost by around 50% in mass-market cars (such as this new Cupra).

Cupra says this concept has 273 miles of range, however it’s not confirmed how far the production version will be able to go.

The cabin of the new Cupra UrbanRebel concept has a futuristic look to it, and there’s plenty of technology on board. The most notable example is the huge curved infotainment screen and digital drivers display.

Elsewhere, the steering wheel has been designed to look like a games console controller and features a four-spoke design. Being a concept car, it’s not clear how much of this will make production.

This new electric car is due to go on sale in 2025, alongside the cars from Skoda and Volkswagen – potentially called Elroq and ID.1 respectively – based on the same platform.

As for price, the UrbanRebel will sit below the Cupra Born in the lineup, and prices are set to start at below £30,000.

Looking for a great deal on a new electric car? Then head over to carwow. You can compare offers from our network of trusted dealers to get the latest discounts on a new car, and you can sell your current car too. Tap the button below to get started today.