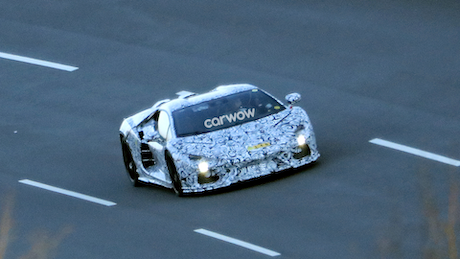 A replacement for the Lamborghini Aventador has been spotted testing, and it’s going to be a V12 plug-in hybrid. Read on for all you need to know.

A prototype for a Lamborghini Aventador replacement has been spotted testing on track, and it’s expected to debut in 2023.

While we don’t yet know what this alternative to the Ferrari 812 Superfast and McLaren 765LT is going to be called, we do know it’ll be the first Lamborghini to be sold as a plug-in hybrid.

Petrolheads of the world will be relieved to hear that the replacement for the Lamborghini Aventador will still get the bulk of its power from a naturally-aspirated V12 engine.

Lamborghini says this engine will be completely unrelated to the one used in the current Aventador, as it needs to be made compliant with current emissions regulations.

That’s not the only step Lamborghini is taking to lower emissions, this new supercar is going to be their first plug-in hybrid as well. Nothing is known yet in terms of electric range or batteries, you can expect to learn more about this closer to the official debut.

Power figures haven’t been announced either. For reference, the latest Lamborghini Aventador LP780-4 Ultimae has 780hp and 720Nm of torque, so you can expect the new model with its electric assistance to have more than this.

This replacement for the Lamborghini Aventador has only been spotted in heavy camouflage, however you can still tell that it retains the classic Lamborghini wedge-shaped silhouette.

You can just about make out the pointy LED headlights and aggressive air intakes set into the stubby front end, as well as the huge vents in the side feeding air to that V12 engine.

Around the back, there are four exhaust pipes set higher up in between the slim tail lights which you can safely say won’t be fake. There’s also a huge rear diffuser which is likely to be functional too.

No images have surfaced yet showing the interior of Lamborghini’s new supercar, however you can expect it to be a radical departure from the current Aventador’s cabin.

While the Aventador is certainly a special place to sit, you can also tell that the design is over a decade old now. Expect to see more screens in the new model, with design cues possibly coming from the newer Urus SUV.

The replacement for the Lamborghini Aventador is expected to go on sale in 2023, so you may see it debut in the Spring next year.

There’s no word on price for this car, which is no surprise seeing as it doesn’t have a name yet. Being a flagship Lamborghini, you can expect it to push well into six-figures.

Looking for a great deal on a new car? Head over to carwow to configure your ideal model and get the best offers back from out trusted dealers. Need a hand deciding which car is right for you? Tap the button below.