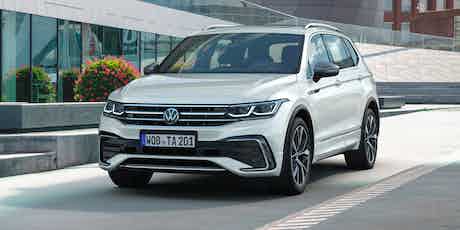 A refreshed version of the Volkswagen Tiguan Allspace has been introduced, bringing styling tweaks and more tech. Read on for full details.

An updated version of the Volkswagen Tiguan Allspace has been revealed. Set to go on sale later in 2021, the seven-seat SUV gets some light visual updates as well as new technology — including semi-autonomous driver-assistance features.

Like the rest of the Tiguan range earlier in the year, the Volkswagen Tiguan Allspace has been given an updated design.

This brings new Matrix headlights and an LED light bar stretching the width of the grille, along with scrolling indicators for the first time on the SUV. The rear of the car is mostly unchanged, though the layout of the taillight LED’s has been altered.

Interior changes to the Volkswagen Tiguan Allspace aren’t drastic, but there are some notable improvements.

A digital driver’s display now comes as standard, replacing dials and gauges with a screen, as well as an optional new Harman Kardon sound system. The air conditioning controls have been moved into the infotainment system’s touchscreen menus as well.

There’s been no change to the practicality of the Allspace, though — it’ll still seat 7 and has 700 litres of boot space.

New for the Volkswagen Tiguan Allspace is VW’s Travel Assist package. This is semi-autonomous driver-assistance technology that allows the SUV to take control of braking, steering and acceleration for you for brief periods.

For cars equipped with a DSG automatic gearbox, this will work from a standstill — though manual cars will need to be travelling at least 19mph for it to work. Both versions will operate up to speeds of 130mph, in case you’re planning any autobahn excursions in your new family SUV…

You’ll have the pick of three petrol engines and two diesels for the Volkswagen Tiguan Allspace.

Details of these haven’t been fully revealed, but all are likely to be 2.0-litre units ranging from 150hp to 200hp. All-wheel-drive will be available optionally too, along with a DSG automatic gearbox.

The refreshed Volkswagen Tiguan Allspace is set to go on sale later this year, with prices likely to start around the £33,000 mark for the seven-seat SUV.