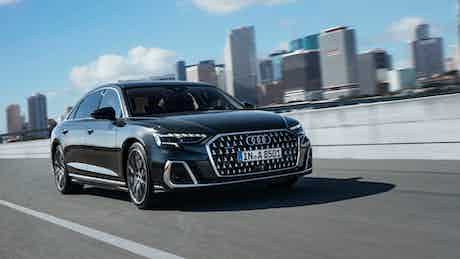 The updated Audi A8 has been revealed with fresh styling and new technology. Read on for all you need to know about this flagship luxury saloon.

Audi has pulled the covers off the updated A8 luxury saloon, featuring some sleeker styling and new, even more, luxurious features.

This alternative to the Mercedes S-Class and BMW 7-Series is going on sale across Europe from December 2021.

The new Audi A8’s design is a case of evolution rather than revolution, but the changes are enough to keep it looking up to date.

Starting at the front end, you’ll find some new, more angular headlights as well as a tweaked bumper and more prominent grille.

Audi has given the new A8 some clever OLED rear lights which can change their appearance depending on which driving mode you’re in. They also have a proximity sensor which will turn them on if someone gets too close behind you when the car’s stationary.

There are two wheelbase options for the Audi A8 in Europe, with a long wheelbase model offered for those who want extra rear legroom.

Audi has also revealed an even longer model for the chinese market called the A8 Horch. This model gets extra chrome on the exterior and different wheel options.

New Audi A8 interior and infotainment

The interior design of the new Audi A8 remains similar to the outgoing model, but this is no bad thing. The cabin has a modern look and the materials are high quality.

Up front, you have three large screens. There are two in the centre, measuring 10.1 inches on top for the infotainment and 8.6 inches below for the climate control and driving functions.

The back seat is the place to be in the A8. Opt for the ‘relaxation seat’ in the long-wheelbase model and you get a massage function as well as heated footrests

There are two 10.1-inch screens for the rear seat passengers to stream videos from a mobile device, as well as a Bang and Olufsen sound system.

The Chinese-only Audi A8 Horch gets some exclusive trim inside including quilted leather, thicker carpets and Horch logos in the seat cushions.

New Audi A8 engines and driving

There’s also a diesel version, plus a plug-in hybrid will be introduced at a later date. All engines in the A8 range are boosted by a 48-volt mild hybrid system.

All A8 models come with adaptive air suspension as standard, however predictive suspension is offered as an option.

This uses a camera to read the road ahead and adjust the suspension accordingly for the best ride quality.

Those seeking a more sporty flavour in their luxury saloon will want to take a look at the Audi S8. This has the same 4.0-litre V8 engine as the standard A8, however it’s tuned to 563hp. This means it can do 0-60mph in just 3.8 seconds.

The S8 also has a sports exhaust to give a better soundtrack, as well as getting predictive suspension and a sport differential as standard for sharper handling.

Outside, the Audi S8 gets a deeper front bumper with a blacked out grille. It also has unique wheels and quad tail pipes.

The interior remains much the same as the standard A8, with the exception of a three-spoke sports steering wheel.

The new Audi A8 goes on sale across Europe from December this year.

Can’t wait for this new model to go on sale? Check out the latest Audi A8 deals available through carwow.