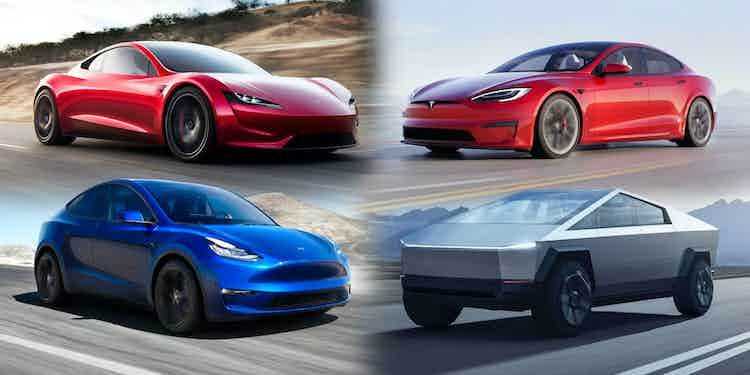 Tesla’s Full Self-Driving system (FSD), which up until now was a £6,800 option on its Model 3, S and X vehicles, will now be available as a monthly subscription. While not technically able to drive the car autonomously 100% of the time, it does offer an advanced suite of driver aids from collision warnings and emergency braking assist to auto parking and lane changing. It even has a smart summon feature which allows the car to navigate to you in a parking lot.

With periodic over-the-air updates adding to the systems abilities, Tesla’s FSD tech is one of the most advanced systems of its kind. However, some owners may not yet be ready to part with a lump sum for a technology that is still in development and the monthly subscription option will be a far more viable choice for them.

Features such as automatically steering and stopping on city streets are planned for release in due course.

Pricing for the US market is $199 per month if you have basic autopilot fitted or $99 if you have the enhanced autopilot feature (which was offered on certain older models). UK pricing has yet to be announced but should be approximately £145 at current exchange rates. The subscription can be cancelled at any time.

You will need to have the FSD computer installed in your vehicle before you can take advantage of the subscription, this is a complimentary service if your car already has the autopilot computer 2.0 or 2.5.

Tesla has confirmed that it will recall almost 6,000 Model 3 (built between 2019-21) and Model Y cars (built between 2020-2021) to tighten potentially lose bolts that form part of the car’s braking system.

Documents from the National Highway Traffic Safety Administration in the US suggest these bolts loosening could cause the tyre pressures to drop, which could increase the risk of a crash. Tesla is not aware of this issue being a contributing factor in any recent accidents, and it will inspect and re-tighten these bolts on all affected cars.

Prices of Tesla models including the Model 3 and Model Y have been increasing due to issues with supply chains, according to company boss Elon Musk.

Increasing costs of parts have caused the list prices of the smaller Tesla cars to rise significantly in recent months as the company adjusts its product pricing in line with material costs.

Musk said: “Prices [are] increasing due to major supply chain price pressure industry-wide. Raw materials especially.” Prices for metals such as copper and steel have risen recently, which will affect all car makers.

Features have also been removed to improve profitability. One example was the lumbar support in the front seats, which the company said was not being used by customers. “Not worth cost/mass for everyone when almost never used,” Musk said.

Elon Musk has announced that customers who bought the new Tesla Model S Plaid will start to get their cars from June 10th, as the car needed ‘one more week of tweak’. The Tesla boss didn’t elaborate on what extra work the car needed before its official launch.

This car feels like a spaceship. Words cannot describe the limbic resonance.

Musk made reference to the car’s claimed sub-two-second 0-60mph time in his tweet, where he said that the “car feels like a spaceship.”

There will also be a Tesla Model X Plaid, though this ultra-fast large SUV will require a longer wait. The even more expensive Plaid Plus versions of both the Model S and Model X are set to arrive in 2022.

Musk also made mention of a new processor and graphics chip in upcoming versions of the Model S and Model X, comparing them to the games console Playstation 5.

The cars will use AMD Ryzen CPUs (processors) and AMD GPUs (graphics processors), which Musk described as having “PS5 level entertainment computing power”.

Elon Musk has stated he thinks the Tesla Model Y will become the world’s best-selling car of any kind by 2023, despite the SUV’s current limited market reach.

To hit that figure, it would need to outsell the Toyota Corolla as the world’s best-seller — which currently sits at 1.5 million units per year.

Musk stated the lofty goal during the latest Tesla earnings call, where the company announced a net income of $438 million (circa. £315m), while confirming deliveries of the updated Model S would begin in May 2021. That will be followed by the refreshed Model X in Q3 2021.

Tesla is also expecting to see more than 50% of growth in deliveries of new cars this year, equating to around 750,000 new vehicles. This will include 2,000 Model S and Model X per week.

It looks as though the first deliveries of the Tesla Cybertruck could be delayed until 2022, if new rumours are to be believed.  Tesla CEO, Elon Musk, has confirmed the design of the truck has been finalised and has driven it around the site where it will be built — but dodged a question on production.

The latest rumours come as an online forum, Tesla Owners Online, asked Musk directly if deliveries of the truck would be expected later this year. Musk did state “Limited production of Model Y this year, high volume next year” but dodged the Cybertruck question entirely.

With the design only recently finalised despite the Cybertruck first being showcased in 2019, it’s possible that the finished truck could look noticeably different — and resulting in the rumoured delays.

There’s no doubt that the Cybertruck’s edgy design would turn heads on the road but some industry insiders expressed concern that, in its present state, the truck wouldn’t offer sufficient pedestrian-impact protection to be legal for use in Europe.

Tesla will launch an entry-level electric vehicle in three years’ time that’ll cost from $25,000. Musk has said it will come with fully autonomous capabilities, although it isn’t clear whether this will be available at the $25,000 price-point or whether it will be reserved for higher-spec versions of Tesla’s upcoming new small car.

Get more info on this new Tesla

Tesla CEO, Elon Musk, has suggested that an optional SpaceX package (named after the aerospace engineering firm he also owns) could enable the upcoming Tesla Roadster to hover.

Musk revealed the exciting details during a podcast with Joe Rogan, mentioning that one of the biggest hurdles his team must overcome is “trying to figure out how to make this thing hover, without, you know, killing people”.

He went on to suggest that an altitude limit could make the new car’s hovering feature safe for the general public. He reckoned a six-foot cap would be enough to prevent injury should the worst happen “so, if you plummet, you blow out the suspension, but you’re not going to die.”

Considering the strict regulation surrounding modern cars, it’s unlikely such a feature would be legal in every market. But Musk went on to say that “at a minimum, I’m confident we could do a thruster where the license plate flips down, James Bond-style, and there would be a rocket thruster behind it, and that gives you three tons of thrust.”

Regardless of whether the new car comes with space-thruster tech, it’s looking likely that the first customer cars won’t be delivered until 2022 at the earliest. When this electric supercar was first revealed in 2017, Tesla CEO Elon Musk hinted the first customers would receive their cars in 2020. This hasn’t happened, and it’s likely the new Roadster won’t be ready for mass production until 2022.

It will, however, be tested at the Nurburgring race circuit before the end of 2021, a tweet from Tesla CEO Elon Musk confirms. This convertible sports car is set to be the fastest accelerating car Tesla has ever made – and that’s saying something.

The German race circuit is a favoured proving ground of many carmakers. Set a lap record here, which Tesla will be aiming to do, and you can be sure of some pretty impressive bragging rights.

Tesla will recall almost 135,000 Model S and Model X cars built before 2018 due to a faulty electronics chip that can cause the infotainment system to malfunction.

The specific issue addressed by the upcoming recall relates to a memory chip within the infotainment system that can only be accessed by the system a set number of times. Once this number is reached, the touchscreen can start to become unresponsive.

The touchscreen in Teslas controls more of the car’s functions than in most conventional cars. Not being able to use this touchscreen is, therefore, potentially more serious.

The American National Highway and Traffic Safety Administration (NHTSA) expressed concern that a malfunctioning touchscreen could leave drivers unable to use the reversing camera or defog their windows on cold mornings.

Tesla has stated that it will reimburse drivers who’ve already paid to have the faulty electronics chip in their cars replaced.

Check out the latest Tesla lease deals or compare the best electric cars available through carwow.

Want to get the latest Tesla news?