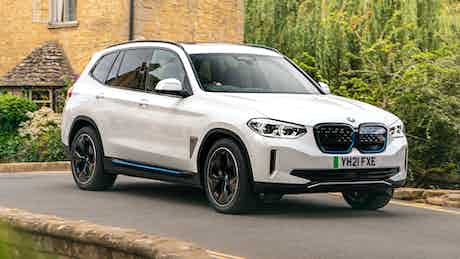 BMW’s updated iX3 electric SUV is now on sale in the UK, with pricing starting at £58,850. Read on for full details.

The BMW iX3 electric SUV is now on sale in the UK, with pricing kicking off at £58,850. This updated iX3 is an alternative to the all-electric Audi e-tron and Mercedes EQC.

The changes to the iX3’s exterior are tiny, but they do — according to BMW anyway — give it a few more visual links to its electric brethren, the large iX SUV and the i4 Gran Coupe electric saloon.

Those changes are largely around the grille, which is a little bigger than before (something of a running theme with BMWs of late) and which now has a slim surrounding trim finished in a pearl-effect blue chrome. The inner surfaces of the grille now have a mesh-style pattern, and there’s a neat little BMW i badge too.

The headlights are also new and are 10mm slimmer than before — just as on the internal combustion X3 models. LED lights are standard with BMW’s ultra-bright Laser Lights available as an option.

Further down, the cooling intakes in the bumper — which feature a ten-stage active air flap which can open and close to improve aerodynamic performance — are now larger, while the intakes at the outer edges get a new ‘L’ shape and BMW i blue accents.

The side wing vents have been reshaped a little, and while BMW has been adding blue accents elsewhere, the ones that were featured on the previous iX3’s side skirts have been deleted. Around the back, there’s a new diffuser under the rear bumper, which does get the blue accent line, while the LED brake lights get a new black surround.

Inside, the cabin looks much the same as before, and the iX3 runs the same BMW Operating System 7 as before — that allows for over-the-air software updates, includes Apple CarPlay and Android Auto connectivity, and comes with a big 12.3-inch screen in the centre of the dash. That can be controlled by the traditional iDrive controller down on the centre console, or you can use it as a touchscreen.

The mapping system for the iX3’s sat-nav has also been updated, and now includes a map overlay that shows you how far you can drive on the current battery charge (a trick lifted from the smaller i3), as well as a navigation charging planner, that can recommend where and when to stop and charge when you’re on a longer journey, as well as helping you to find faster-charging points and chargers that are near points of interest (as opposed to at the back of a grubby retail park).

Along with the launch of the updated iX3, BMW UK is also launching BMW Charging — a service which the Munich carmaker says gives drivers access to more charging points around the world than any other, using a single RFID chip card, or the BMW smartphone app. In the UK, the BMW Charging works with providers such as BP pulse (including ChargeYourCar), ESB, Osprey, Source London and Chargepoint Network UK (including INSTAVOLT), as well as the high-power 350kW IONITY chargers. In all, BMW Charging gives access to 8,500 AC and 1,500 DC charging points across the UK, plus a further 162,000 AC and 11,000 DC charging points across Europe.

If you buy a new iX3, you get both those extra charging packages, free, for 12 months.

The iX3 hasn’t changed mechanically — or electrically — so it’s still using the same 80kWh battery pack, the same 285hp, 400Nm of torque electric motor, and it has the same 286-mile one-charge range on the WLTP test.

The facelifted BMW  iX3 is now on sale in the UK, though no sign just yet of the regular X3.

For the regular BMW X3, expect pricing to kick off at slightly more than the current car’s £42,000 asking price.

Can’t decide which car is best for you? Compare the latest BMW X3 deals available through carwow or check out the top 10 SUVs and best electric cars on sale now