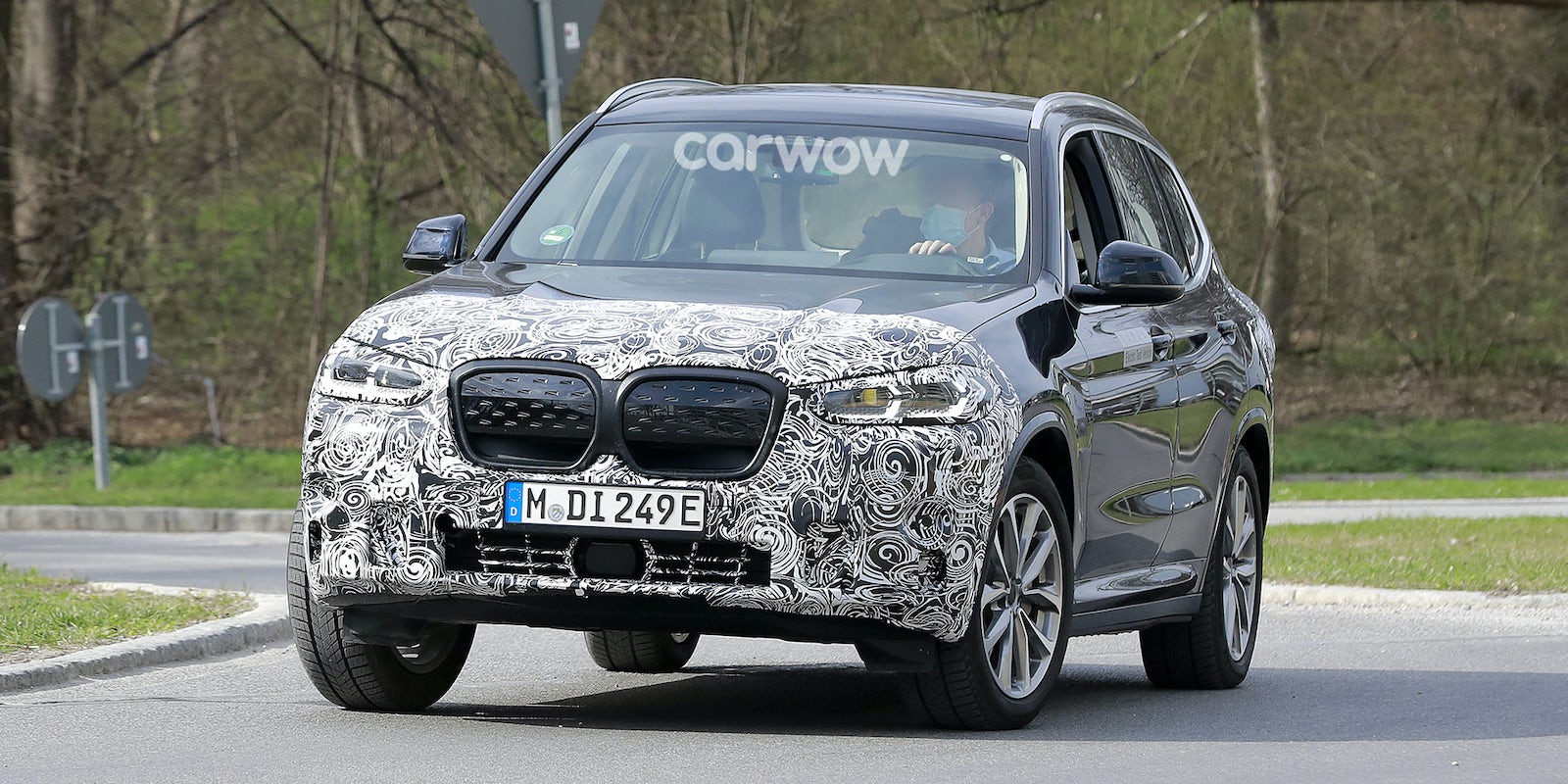 Uncovered versions of the refreshed BMW X3 and iX3 have emerged, suggesting an official reveal could be imminent. Read 0n for full details.

Refreshed versions of the BMW iX3 all-electric car and its X3 combustion-powered counterpart have been spotted uncovered, looking ready for production. The iX3 went on sale recently, but the X3 SUV range has been on the market since 2017 with no major changes, so it’s due a mid-life facelift.

Along with some visual tweaks and interior upgrades, the iX3 may get a new dual-motor setup like the Mercedes EQC and Audi e-tron offer. It’s unlikely the X3 engine range will see much change, though.

Images of the uncovered BMW iX3 and X3 facelifts give you your best look yet at these updated SUVs. Though these cars look to be destined for China, expect UK cars to look almost identical (albeit without the extra badging at the rear.)

This particular iX3 is sporting a chrome-trimmed grille and does without the typical blue bits of the current car. It’s likely these will still be available as an optional extra, however.

Both cars appear to have new headlights and a slightly tweaked grille design and bumper designs. The X3 looks to be in M Sport guise, and gets a black grille as a result.

New taillights feature at the back, along with a faux diffuser and fake vents — though these could be limited to the M Sport car.

BMW’s mid-life updates tend to include a few new trim options as well as the latest infotainment system available, in this case, it could mean the new iDrive 8 infotainment system with a huge, curved display (just like the one you’ll get in the upcoming BMW iX electric SUV)

While no pics are available of the interior, you can expect a few new materials to be offered and potentially some revised button placements. The iX3 will get blue details to separate it further from the standard petrol- and diesel-powered cars.

The current iX3 is available solely with a single motor driving the rear wheels. It produces 286hp and accelerates from 0-60mph in 6.8-seconds, while the 80kWh battery pack gives the iX3 285 miles of range.

These figures put the BMW iX3 in the middle of the electric SUV pack, offering slightly more range than the Mercedes-Benz EQC but falling short of the Jaguar i-Pace. The 150kW fast charging compatibility means you can potentially replenish 80% of the iX3’s battery capacity in just 34 minutes.

With other electric SUVs offering dual-motor setups, the updated iX3 may well incorporate the all-wheel-drive drivetrain from the upcoming BMW i4, spawning a more performance-oriented model. With a total output of 530hp and a 0-60mph time of less than four seconds, the BMW i4 will be the marque’s first electric M performance model. This technology could find its way into a future BMW iX3 M model, too.

The facelifted BMW X3 and iX3 should go on sale together. No official date has been released yet but you can expect both to be available later in 2021.

The current BMW iX3 range comprises the Premier Edition (starting at £58,850) and the Premier Edition Pro that sells for £61,850. Prices should rise slightly for the facelifted equivalents while the possible iX3M Performance trim set to cost closer to the £70,000 mark.

For the regular BMW X3, expect pricing to kick off at slightly more than the current car’s £42,000 asking price.

Can’t decide which car is best for you? Compare the latest BMW X3 deals available through carwow or check out the top 10 SUVs and best electric cars on sale now