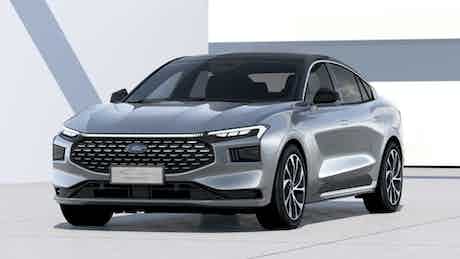 The new Ford Mondeo has been revealed ahead of it going on sale in 2022. Before you get your hopes up, it’s going to be sold exclusively in China. Read on for the full details.

Check out the latest Ford deals

The new Ford Mondeo has been revealed ahead of it going on sale later in 2022. Sadly for all you Mondeo fans out there, it will only be sold in China for now.

No details about this Mazda 6 and Volkswagen Passat alternative car have been released yet, but it looks very similar to a model that was just revealed for the Chinese market called the Ford Evos.

The new Ford Mondeo takes a lot of its design cues from the Chinese-only Ford Evos SUV. Upfront you’ll spot the wide grille is flanked by some slim LED headlights connected by a full-width light bar.

Looking along the sides, the door handles are flush to the bodywork, just like on a Tesla Model 3.

The overall side profile isn’t too different from the outgoing Mondeo – there’s a sloping roof that stretches almost all the way to the edge of the bootlid.

The rear end gets LED lights which are linked together by what appears to be a light bar. The rear bumper has a clean design, with the exception of some exaggerated exhaust surrounds.

There are no details on what engines the Evos will have, so it isn’t clear what engines might be available on the Mondeo replacement either. The new car isn’t expected to be offered as an EV, so it’s likely to be sold with petrol engines, possibly assisted by hybrid or mild-hybrid technology.

Ford also promised autonomous driving tech on the Evos, which could come to the Mondeo replacement as well.

There are no pictures of the Mondeo’s interior, but you can use the Evos as a guide to how it might look. The China-only model’s cabin has an astonishing 27-inch display screen covering virtually the entire dashboard, with only a few buttons and plenty of smart-looking materials.

There’s a large centre console with a gear selector and some storage space, and pictures show that contrasting orange accents are found throughout the cabin – something you could see on high-spec models.

The new Ford Mondeo goes on sale in China later on in 2022. There is no word from Ford on whether this new car will ever come to Europe, but they may decide to sell it here if there’s enough demand.

In terms of price, it’ll likely cost more than the previous Mondeo (which would set you back from about £25,000) but how much more isn’t clear yet.

Did you miss out on a new Ford Mondeo? Check out deals on the Mazda 6 or check out the best family cars currently on sale.