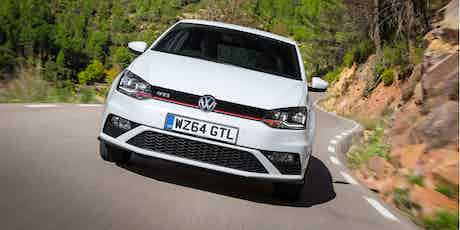 Volkswagen’s answer to the Ford Fiesta ST will march into battle from March, armed with a larger, more powerful engine and a manual gearbox

Volkswagen has released the full prices and details for its baby hot hatch, the Polo GTI.

Perhaps calling it a baby is doing it a disservice. Thanks to a new 1.8-litre turbocharged engine, it now produces a very grown up 189hp – a 12hp improvement over the old 1.4 turbo. With that extra displacement comes a generous extra slug of torque which, in order to reduce stress on the dual-clutch automatic gearbox, is limited to 184lb-ft.

Driving purists will be pleased to hear that a six-speed manual gearbox has been re-introduced, and because it’s a tougher unit than the auto, can handle an extra 52lb-ft of wallop. That means that the GTI will now sprint from zero to 62mph in 6.7 seconds, and will continue all the way to 146mph.

How about the looks?

VW is keen to make comparisons between the Polo and the larger Golf GTI, and there are several cues – like the black honeycomb grille underlined by a single red stripe – that the two cars share. The front bumper has a refreshed air dam, while LED headlights are now standard. The rear remains almost identical to before, but new 17-inch alloy wheels refresh the flanks. The GTI sits subtly lower than the standard Polo, too – 10mm at the front and 15mm at the back.

The cabin remains largely the same as the old model. That means that you’ll find tartan cloth pattern on the seats, a (slightly tweaked) sports steering wheel, and some red stitching dotted around to liven the place up.

Also updated is the electronic stability control system, which Volkswagen says has been “adapted for use on a track.” Essentially, this means that the ESC can be set to one of two modes. The first is the standard set-up for everyday use, while Sport mode disables the traction control, and the ESC allows a little more slip before it intervenes. For those looking for a yet more focused drive, an optional Sport Performance Pack offers sharper steering and acceleration responses, and a slightly more vocal soundtrack from the engine.

Many. The hot hatch class is overflowing with talent currently. From the composed yet fun Peugeot 208 GTI, to the road testers’ favourites, the Ford Fiesta ST and MINI Cooper S, you really are spoiled for choice.

The standard three-door manual Polo GTI is priced from £18,850. The marginally more economical DSG gearbox costs an extra £1,245, and if you’d rather five doors, then that’ll be another £630. The first UK deliveries of the updated model will begin in March.