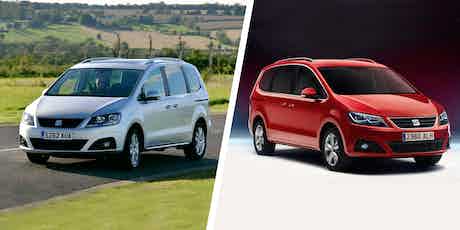 SEAT has updated the Alhambra for 2015, but what’s new? We run the a fine-toothed comb over the facelifted model

SEAT has announced that the Alhambra MPV is to be treated to a mid-life upgrade, revolving mainly around more powerful and efficient engines.

The Alhambra has long been a mainstay in the seven-seat MPV market. It’s large, practical and offers strong value for money, allowing it to compete with the likes of the Ford Galaxy and Chrysler Grand Voyager. Most of the changes to the new model come in the form of improvements to the engine range, changes on the skin are somewhat harder to spot.

Outside, the overall look remains much the same – almost identical, in fact. A tweaked SEAT badge sits within the front grille, the rear lights are now LED items which look more distinctive – especially at night – and a couple of new alloy wheel designs are offered. Otherwise, the new model remains instantly recognisable as an Alhambra. Or instantly forgettable, depending on your point of view…

As with the outside, the changes to the cabin require a very keen eye to spot. A new steering wheel design lifted from the Leon hatchback replaces the previous item, while some new trim colours and tweaks to the heating controls are equally subtle. Perhaps most beneficial to customers inside is the latest generation of SEAT’s navigation system. The updated touchscreen display features an increased resolution, while more powerful processors not only make the user interface smoother, but allow for faster calculation of planned routes.

Sitting in the front, you might notice squeezes and shoves in the back. No, it isn’t your children kicking the back of the seat, but a new massage function. Optionally available, it aims to reduce stress and increase comfort.

The former engine range consisted of a single 2.0-litre diesel available in two states of tune – 140hp and 177hp. A heavily reworked version of that engine now take its place, offered in 150hp and 184hp guises. As well as offering more power, the latest tweaks ensure the new units meet strict Euro 6 emissions regulations too. Now as much as 15 per cent more efficient than before, the lower-powered diesel now returns an impressive 57.6mpg – up from 50mpg in the old model. Joining the lineup is another tried and tested Volkswagen Group unit – a 1.4-litre turbocharged petrol producing 150hp.

The Alhambra range is offered with a choice of manual or automatic gearboxes. The Dual-clutch DSG autos improve efficiency by offering a coasting function, whereby once the driver lifts off the accelerator, the engine decouples from the gearbox.

New safety kit – such as a blind spot warning system – is now standard across the range, as is what SEAT calls Dynamic Chassis Control. DCC is capable of minutely and instantaneously adjusting the dampers to deliver the best balance of ride and handling depending on the current conditions which, in theory, should improve both comfort and driving enjoyment.

No official details have been announced regarding prices. We’d expect very little difference from the current 2.0-litre diesel’s £25,630. However, the 1.4-litre petrol is likely to be the new entry level model in the range, and should cost a little less.

It’ll arrive at dealerships in the summer and UK buyers will be able to pre-order theirs by the end of May.

Our full review of the SEAT Alhambra offers more information on what it’s like to drive and own, as well as how it compares to its closest rivals.