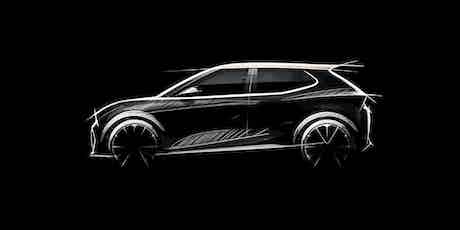 SEAT has revealed the first details on new electric compact crossover it’ll be launching in 2025. Read on for everything known about the car so far.

A new electric car from SEAT is on the horizon. Details on it are scarce right now (it doesn’t even have an official name yet), though it will be SEAT’s alternative to other compact electric SUVs such as the Hyundai Kona Electric, Peugeot e-2008 and Vauxhall Mokka-e.

Details on the new SEAT’s design are pretty scarce – all you have to go on is a solitary teaser sketch (shown above). It does confirm the new car will be relatively small (about the size od today’s SEAT Arona) and have SUV-like proportions.

The image confirms it won’t look too dissimilar to the Arona, either: both cars will have chunky wheel arches, a bluff rear and big rear pillars. Because there’s no need to fit an engine under the bonnet of the electric car, though, it’s set to get a shorter and stubbier nose than the petrol-powered SEAT Arona.

It’ll be a while yet before this new car goes on sale, so SEAT hasn’t revealed much about its performance or specs. However, other new electric cars from the wider Volkswagen Group (that SEAT’s a part of) do give you an idea of what to expect.

Because the SEAT will be a more affordable car that’s designed with town and city driving in mind, it almost certainly won’t come with a big battery. It’s more likely the car will use a smaller battery, along the lines of the 45kWh setup used in the entry-level VW ID3 hatchback. For reference, the entry-level VW ID3 has a range of 218 miles, but it costs from almost £30,000.

As with the batteries, there’s no info yet on what sort of motors will power this electric SEAT. It s a small car that you’ll use in town so don’t expect too much oomph – up to 150hp (which is comparable to what the most powerful SEAT Arona has at its disposal) will probably be as punchy as things get.

That should at least mean performance will be respectable by small car standards – expect it to accelerate from 0-60mph in around nine seconds.

It’ll be a while yet before you’ll be able to place an order for SEAT’s new small SUV – it isn’t due to go on sale until around 2025. Despite being so far away, though, SEAT has confirmed the new car will cost from between £17,000 to £22,000. That’s about as much as the similarly-sized Seat Arona, which will make the new model one of the cheapest new electric cars on sale.

Can’t wait for this new car? Compare the latest SEAT deals available through carwow or check out the top 10 electric cars on sale now.