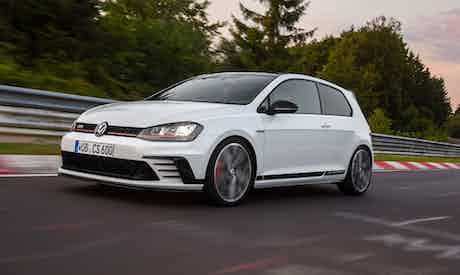 Volkswagen has released a new special edition of the Golf GTI, which is its most powerful car to wear the three-letter badge to date.

Known as the Clubsport, the new model marks the 40th anniversary of the original GTI, and features unique styling add-ons and quite a lot more power than the standard model.

On the outside, the front bumper is wider and more aggressive than the regular GTI, closer to the more extreme Golf R in appearance. The sides gain tweaked sills, which feature a black racing stripe – a nod to the plastic side strips fitted to the Mk1 GTI back in 1976. The door mirrors and the roof are painted black, while at the back chrome-tipped tailpipes are a larger diameter than normal.

A larger rear wing features a twin element design, and has been wind-tunnel tested to deliver increased downforce over the roof spoiler fitted to the standard GTI. The alloy wheels measure 18 inches in diameter, and are a design unique to the Clubsport. 19-inchers are available as an optional extra.

The cabin features a pair of deep bucket seats feature a tartan inlay as a homage to the original, likewise the gearknob comes in a traditional ‘golf ball’ style. The steering wheel is trimmed in grippy alcantara, and the roof headlining is black for a sportier look.

The engine’s performance has been upped to match those looks. It now produces 261hp – 43hp up on the standard model. Flex your right foot a little harder, and that increases to 286hp for short periods of time via an ‘overboost’ function.

These changes improve performance significantly, dropping the 0-62mph time to 6.0 seconds – half a second quicker than the regular version. That figure drops a further 0.1 seconds should you choose to equip the Clubsport with the DSG dual clutch automatic gearbox.

Volkswagen are yet to confirm prices for the new model, but it should sit somewhere between the GTI and R variants, so £29-£30,000 seems likely.