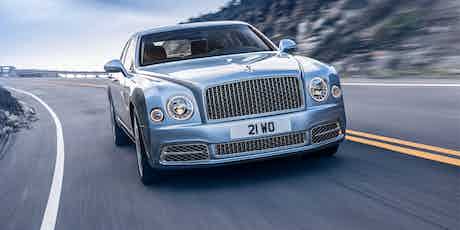 Bentley has announced details of the new Mulsanne luxury saloon ahead of its launch at 2016’s Geneva Motor Show. We discover what’s new…

The Bentley Mulsanne is one of the most expensive and luxurious cars you can buy. The brand has confirmed a facelifted model now offered in standard, Extended Wheel Base and Speed trims with a restyled exterior and a host of mechanical and interior upgrades. Read on to see exactly what’s new…

The announcement of a new Mulsanne means dealers may be keen to offer better deals on the outgoing model. Check out our current Bentley Mulsanne car configurator to see how much you could save when you buy your next car through carwow.

The 2016 Mulsanne features all new body panels from the windscreen forwards. The grille is now squarer, chrome plated and is better matched to the lower three-piece air intakes. The familiar quad-headlight arrangement remains, although the lights themselves have been refreshed and now feature LED technology.

A new vent with clear ‘Flying B’ styling cues is fitted just behind the front wheels with a chrome strake running the length of the car. Customers can choose to specify the new Mulsanne with larger 21-inch alloy wheels and two-tone paintwork for a more individual look.

Generous helpings of wood, leather and brushed metal adorn the interior of the new Mulsanne. Almost every touchable surface has been subtly redesigned, including the seats, doors, dashboard and armrests, all of which can be trimmed in your choice of 24 colours. An 8.0-inch dashboard mounted touchscreen infotainment system is paired with two back-seat 10.2-inch displays and a 60gb hard drive as standard.

The new Muslanne Extended Wheel Base (EWB) adds 250mm to the rear legroom, letting lucky passengers make full use of airline-style legrests and reclining seats. Bentley claims the central rear-seat storage, USB ports and optional folding tables make the back seats of the Mulsanne EWB a practical place to work as well as travel.

The Mulsanne is fitted with Bentley’s trademark six-and-three-quarter-litre V8 engine with twin turbochargers. A maximum output of 530hp and monstrous 1,100Nm of torque power the Mulsanne Speed to 60mph from rest in just 4.8 seconds and on to a top speed of 190mph. Bentley claims these figures are unmatched in the ultra-luxury segment.

Thanks to these upgrades and improvements we expect the price of the new Bentley Mulsanne to rise slightly over the current model. The standard Mulsanne will probably cost more than £230,000 and EWB and Speed models could come with price tags in excess of £250,000.

The new Bentley Mulsanne will be publicly launched at the 2016 Geneva Motor Show. The first round of customers can expect to receive their new Bentleys in the summer of 2016.

Save money on your new Bentley Mulsanne

If you’re looking to save money on a new luxury car, our Bentley Mulsanne car configurator can help you find a great deal. If you’re not sure which car to buy, our car chooser tool is here to help.