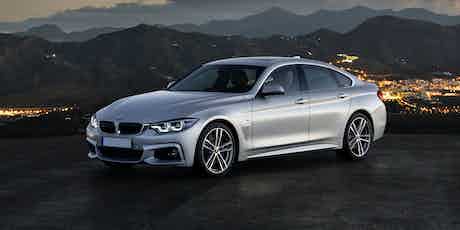 BMW has announced UK prices for the refreshed BMW 4 Series lineup that’ll be available to order from 19 January. The updates apply to all three models across the range including 4 Series Coupé, Convertible and Gran Coupé models.

The 4 Series has undergone a bit of nip and tuck in the form of new LED headlights and brake lights. All models come with BMW’s signature ‘angel eyes’ daytime running lights while fog lights now feature LED tech as standard. All models are available with adaptive headlights that automatically adjust to different road conditions, too.

On M Sport versions, the 4 Series’ large one-piece air intake is bordered by a high-gloss black bar to give it more imposing road presence. At the back, all models come fitted with new brake lights featuring a sweeping insert red.

BMW has always been on the cutting edge when it comes to technology – its iDrive system is one of the best infotainment systems on the market. Its new Professional navigation unit – standard in M Sport trim – features a revised interface with six rearrangeable icons like a smartphone. A digital instrument display is also available on the new car.

The latest 4 Series has been lowered and made wider while its suspension has been tuned to deliver even more agile handling. The Coupe and Gran Coupe will feature a stiffer ride than the outgoing models but BMW engineers claim ride comfort won’t be compromised.

Your choice of engines remains the same as the old car. The most efficient unit is a four-cylinder 2.0-litre turbocharged diesel engine that’ll happily return 70.6mpg. Drivers looking for more power will be better served by BMW’s 3.0-litre six-cylinder engine in 440i models.

Entry-level cars come with a six-speed manual gearbox while mid-range models are equipped with an eight-speed automatic. All-wheel drive is also available as an optional extra across the range.

The 4 Series will be available to order from 19 January 2017. Entry-level 420i Coupe models will set you back from £32,625 while range-topping Convertible versions in 435d guise with all-wheel drive will cost more than £50,300.