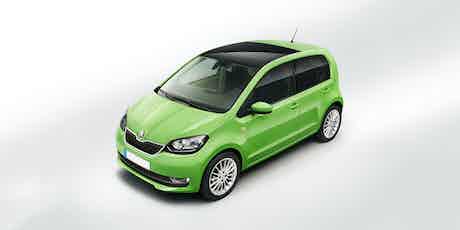 The Skoda Citigo will be facelifted for 2017 with refreshed styling but won’t get the same 1.0-litre turbocharged engine as the latest VW Up

Skoda has refreshed its compact Citigo city car for 2017 with a few styling tweaks and a selection of new features. This facelifted model will be shown to the public for the first time at the 2017 Geneva Motor Show in March and go on sale before 2018.

The biggest visual change Skoda’s made comes in the form of a wider black grille with integrated square foglights in place of the old car’s round units. The headlights look to be the same shape as the outgoing car but feature new inserts and LED daytime running lights. An optional cornering function for the fog lights will also be available.

Kiwi Green has been added to the Citigo’s colour palette alongside new 15-inch alloy wheels in a silver or grey finish. Inside, you’ll find a new leather-trimmed multi-function steering wheel and an optional umbrella that can be stored under the passenger seat.

More excitingly, the stereo has been upgraded with USB connectivity, an SD card reader and aux-in socket as standard while top-spec systems come with Bluetooth, a colour screen and six speakers.

Unfortunately, Skoda’s not chosen to fit the latest Citigo with the new turbocharged 89hp 1.0-litre engine from the recently refreshed VW Up. As a result, you’ll be offered either 59hp or 74hp models – both of which can return 57mpg.

The new Citigo will make its public debut at the 2017 Geneva Motor Show in March and should go on sale before 2018. It’s expected to cost approximately the same as the outgoing model so entry-level cars could set you back around £8,500 while range-topping versions could cost closer to £11,500.