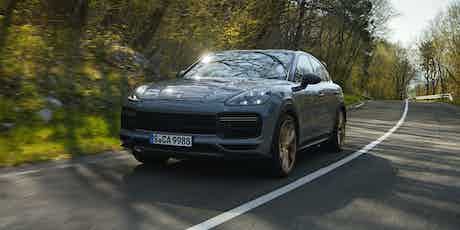 A new performance-oriented version of the Porsche Cayenne Coupe has been revealed with 640hp twin-turbo V8. Read on for full details.

A new high-performance version of the Porsche Cayenne has been revealed, dubbed the Turbo GT.

It’s the fastest Cayenne yet, with a 640hp engine on-board to propel this BMW X5 M alternative to a top speed of 186mph.

Even though most versions of the Porsche Cayenne are offered as a conventional-looking SUV and a sleeker ‘Coupe’, you can only have the Turbo GT as the latter.

Visual changes over the standard car include a model-specific front bumper with a larger lip and bigger air intakes.

Black wheel arch extensions have been fitted, along with a standard-fit carbon fibre roof and 22-inch alloy wheels.

The active rear spoiler has been given a 25mm larger lip to it as well, said to improve downforce by 40kg.

It’s not quite a stripped-out, track-ready affair inside the Porsche Cayenne Turbo GT but it does get some racier touches over the rest of the range.

For example, there’s more Alcantara throughout as standard plus a new steering wheel with a yellow centre marker.

Its infotainment system now supports both Apple CarPlay and Android Auto for the first time on the SUV too.

Here it produces 640hp and 850Nm, a 90hp and 80Nm increase respectively. That power is sent to all four wheels through an eight-speed automatic gearbox. The result? This new Cayenne Turbo GT will do 0-60mph in 3.3 seconds and hit 186mph. That makes it the fastest Cayenne built to date.

Orders are now being taken for the Porsche Cayenne Turbo GT, with prices starting from £143,910.

Get your name down now and you can expect to get the keys later in autumn.