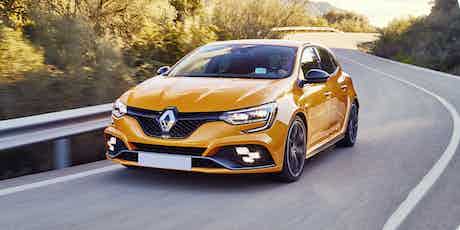 Renault has unveiled a high-performance Megane RS hot hatch to rival the likes of Volkswagen Golf GTI. Read on for details…

Renault‘s revealed the new Megane RS with a 280hp turbocharged petrol engine and a new four-wheel-steering system. The French firm’s flagship hot hatch will give the likes of the Honda Civic Type R and VW Golf GTI a few sleepless nights when the first cars arrive in the UK in July.

There’s no chance you’ll mistake the Megane RS for a humdrum family hatchback in the supermarket car park. At the front, you’ll spot some huge air intakes, a new black grille, some RS badges and Renault’s signature chequered-flag fog lights.

The Megane RS’ wheel arches have been stretched outwards to cover its new, wider alloy wheels, and below the doors, some deeper, wider side skirts. There’s also a large air vent behind the front wheels and a colour-coded spoiler mounted above the rear windscreen.

At the rear, you’ll find a giant central exhaust pipe nestling in a wide, black diffuser. The standard car’s broad brake lights have been carried over to the high-performance RS model, but below them are a pair of large vertical air vents.

Plenty of contrasting red touches dotted around the RS’s cabin make it feel much more special than the standard Megane’s. More supportive sports seats with thicker bolsters to hold you securely in place in tight corners are joined by a leather and suede-like Alcantara-trimmed steering wheel with red RS badging.

You also get red trims on the gear lever and some red plastic and carbon-fibre-effect trims on the doors. All cars come with Renault Sport badges on the dashboard and models with an automatic gearbox get some large shift paddles behind the steering wheel.

All cars come with a seven-inch touchscreen infotainment system as standard, alongside dual-zone climate control, rear parking sensors and sat-nav. You can, however, upgrade to an 8.7-inch touchscreen or add a beefier BOSE stereo for £300 and £800, respectively.

The new Megane RS comes with a 1.8-litre turbocharged petrol engine that produces 280hp – that’s 50hp more than the VW Golf GTI, but 40hp less than a Honda Civic Type R. Despite this, the RS is just as quick as the Type R – both will accelerate from 0-62mph in just 5.8 seconds.

Both come with a six-speed manual gearbox as standard, too, but you can get the Megane with a dual-clutch six-speed automatic for an extra £1,700. It won’t make the RS accelerate any faster, but it does improve fuel economy slightly. Renault claims it’ll return 40.9mpg compared to the manual’s 39.7mpg.

Also standard in the Megane are selectable driving modes that let you choose between comfortable and racier settings for the steering, accelerator and the automatic gearbox (where fitted). There’s even a dedicated RS button on the dashboard that’ll instantly put the car into Sport or Race settings depending on how long you press it. The former stiffens the steering and reins-in the electronic stability control while the latter turns the car’s stability programs off completely.

Speaking of Race settings, if you plan to take your Megane RS on regular track days you’ll want to consider paying extra for the upgraded Cup Chassis. This comes with stiffer suspension designed to stop the car leaning in tight corners and a limited-slip differential to help stop individual wheels from spinning when you accelerate hard.

Another of the Megane RS’ party pieces is its neat four-wheel steering system – something you won’t find on any other hot hatch. This helps make it as manoeuvrable as possible at slow speeds and very stable during high-speed cornering.

The Renault Megane RS is on sale now. Models with a manual gearbox cost £27,495, while automatic models will set you back £29,195. If you order your new Megane RS before 31 May, Renault will offer to fit the upgraded £1,500 Cup Chassis for free. The first UK deliveries are expected some time in July 2018.

The Renault Megane RS is on sale now. Models with a manual gearbox cost £27,495, while automatic models will set you back £29,195. If you order your new Megane RS before 31 May, Renault will offer to fit the upgraded £1,500 Cup Chassis for free. The first UK deliveries are expected some time in July 2018.