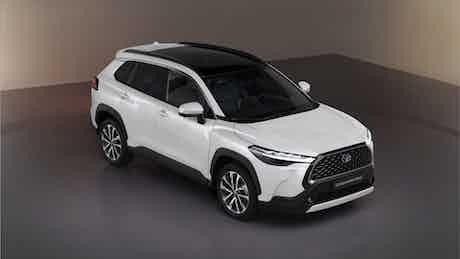 A new SUV version of Toyota’s trusty Corolla, called the Corolla Cross, has been revealed. It sits between the C-HR and RAV4 in the lineup and is expected to go on sale in Autumn 2022.

The new Toyota Corolla Cross has been revealed with an all-new hybrid system, and is set to fill the gap between the C-HR and RAV4 in Toyota’s line up.

This alternative to the Ford Kuga and Nissan Juke is due on sale in the UK in late 2022.

The new Toyota Corolla Cross looks a bit like a RAV4 that’s shrunk in the wash, which isn’t necessarily a bad thing. It sports a clean, fuss-free design that looks eye-catching without being overly fussy.

Up front, it has a wide grille that makes it look a bit cross about something (perhaps that’s where the name came from?)

Check out the top SUVs on carwow

This is complemented by some angular headlights and plenty of black plastic trim that’ll probably be more suited to fending off supermarket trollies than boulders on an off-road course.

The rear end is sporting some slim brake lights, and some more black cladding. You won’t find any exhaust fakery here like on some other SUVs.

The new Toyota Corolla Cross shares a lot of its interior with the Corolla hatchback, which is no surprise.

This means you get a logically laid out cabin with physical buttons for the climate control. Being a Toyota, it should feel solidly built as well.

In the centre of the dashboard you’ll find a 10.5 inch infotainment system with Apple CarPlay and Android Auto smartphone mirroring built in.

It pairs a 2.0-litre petrol engine with an electric motor to produce 195hp.

It’s available with either front-wheel-drive, or an all-wheel-drive system that adds an additional electric motor at the rear.

The new Toyota Corolla Cross is due to go on sale in the Autumn of 2022.

Pricing hasn’t been announced yet, but expect it to be between the C-HR and RAV4. Around £30,000 seems sensible.

Can’t wait for this new car to go on sale? Check out the latest Toyota Corolla deals available now or compare the best SUVs on sale.