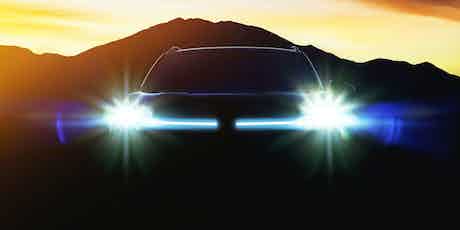 VW has teased an image of a new small SUV that’s set to sit between the VW Tiguan and VW T-Roc in the brand’s range. Here’s everything we know so far…

A new VW SUV will be revealed on 13th October 2020 as a smaller alternative to the Tiguan and a more practical choice than the VW Golf-based T-Roc SUV.

This new car has been teased in a single official image. The picture shows a car with a similar set of daytime running lights (DRLs) to the recently revised VW Arteon with a few distinct creases visible on the car’s bonnet.

The new model’s roof is raised above that of the Arteon, however, and the windscreen appears steeper and more square – as you’d expect of a small SUV. The same goes for the two roof rails that are just visible in the teaser image.

Besides the large Touareg, all of Volkswagen’s SUVs, from the T-Cross to the Tiguan, are built using a variation of the same underpinnings – called a platform. The new SUV is expected to use the same foundations, which would allow VW to fit it with a range of petrol, diesel and mild-hybrid engines. Front- and four-wheel drive configurations would also be possible.

There’s a chance, albeit slim, that the new SUV could be offered in sporty ‘R’ guise using a powerful 2.0-litre turbocharged petrol engine and four-wheel drive – just like in the T-Roc R. No details about what engines will power the new SUV have been announced.

VW has confirmed that the new SUV will be revealed on 13th October 2020. The press release announcing this new model is addressed in VW’s United States headquarters in Herndon, VA. This could mean that the new car is intended for the North American market only, but considering the popularity of SUVs in Europe and the UK, there’s every chance it could go on sale here, too.