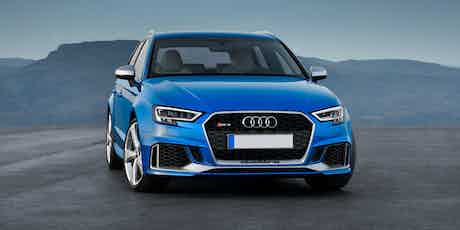 Audi’s released official details of the upcoming RS3 Sportback before it breaks cover at the 2017 Geneva Motor Show in March. New styling and a more powerful engine should help it keep pace with the likes of the Mercedes-AMG A45 and BMW M140i.

The new RS3 Sportback comes fitted with an identical front bumper to the recently released RS3 Saloon. Sharp new headlights taken from the facelifted A3 are joined by a number of new air intakes, a large contrasting trim piece and the tell-tale quattro logo stamped on the silver grille surround.

Under the bonnet, the 2.5-litre engine has gone under the knife, too. Many aluminium components replace heavier steel parts while a new exhaust and revised valves help raise its power output by 33hp. This fairly unassuming hatchback now boasts a potent 395hp –20 more than the A45 and 60 more than the M140i.

A seven-speed DSG automatic gearbox and a quattro four-wheel-drive system directs this power to all four wheels and helps launch the RS3 from 0-62mph in just 4.1 seconds – 0.2 seconds faster than the old car. Top speed is limited as standard to 155mph but – if you really want to put your driving license in jeopardy – can be extended to 174mph on request.

Inside, you’ll find black leather sports seats, Apple CarPlay, sat nav and a personal WiFi hotspot as standard. Unfortunately, you’ll have to fork out a little extra if you want to replace the traditional analogue dials with Audi’s Virtual Cockpit display.

The new Audi RS3 is expected to cost approximately £45,000 when it’s launched in August 2017. Full details should be announced at the 2017 Geneva Motor Show in March.