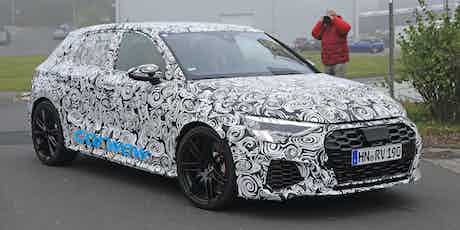 The next-generation version of the Mercedes-AMG A45-bothering Audi RS3 Sportback has been spotted during a test near the Nurburgring.

This is the first time the hatchback has been spotted in the metal. The hyper-souped-up version of the Audi A3 Sportback – which is itself set to be replaced for 2020 – is expected to be properly unveiled next year. It will join the all-new A3, S3 and RS3 saloon to complete the revamp of Audi’s small family car range.

The new spy pictures obtained by carwow reveal a number of changes that not only distinguish the upcoming RS3 from the current car, but also bring it in line with the next A3.

At the front, the grille is noticeably wider than the outgoing car’s. It’s also flanked by air intakes that are now pentagonal, as opposed to the old RS3’s quadrilateral vents.

Both of these things have already been spied on the new A3. However, what makes the RS3 Sportback’s design stand out from its less powerful sibling is its array of more muscular-looking touches. The air intakes are clearly larger than the A3’s, while both the front and rear bumpers bulge out more. Plus, both the intakes and the grille of the RS3 have been decorated with a hexagonal pattern that’s more aggressive-looking than the A3’s.

Finally, the RS3 boasts beefed-up exhaust pipes, much more noticeable than you’d find at the back of the new A3. Whether or not said exhausts will pass the carwow Stick of Truth test remains to be seen…

Inside, you can expect to find a new interior with more flashy, high-tech features. Likely to be included are illuminated door sills and a computer that can record acceleration and lap times – not to mention a redone infotainment system. The 2020 RS3 will very likely receive a new, 10.1-inch MMI touchscreen on its dashboard, with the rotary dial controls on the current model being scrapped. Next to it will almost certainly be a 12.3-inch digital instrument cluster, directly behind the steering wheel.

The usual racing-themed touches are expected to make a comeback inside the RS3, too, such as winged sports seats, a flat-bottomed sports steering wheel, a dynamic Drive Select function and metal gearshift paddles.

What the RS3 Sportback will pack in terms of power and performance is yet to be confirmed. The current model has a 2.5-litre petrol engine that can pump out 400hp and go from 0-60mph in 4.1 seconds. But if the new RS3 hopes to compare with the Mercedes-AMG A45 S alternative, it will need to meet that car’s 421hp output and 0-60mph time of 3.9 seconds.

Bookmark the carwow news hub to stay up to date on the most exciting stories on your favourite models.