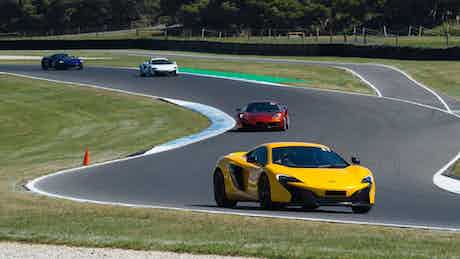 While there’s nothing stopping you from taking the family MPV out on a track day, you might want a more specialist vehicle to ge the most out of the experience. So here are the best track day cars you can buy.

If you consider yourself a driving enthusiast, then you’ll probably find a lot to like about track days. After all, they let you stretch the legs of the car you’re driving in a controlled environment, and away from the pitfalls that blight driving on public roads such as congestion and road works.

While there’s nothing stopping you taking a regular family car out on a track day and having a lot of fun doing so, you may want to consider a more dedicated performance car to get the most out of your on-track experience. Handily, there are plenty of great options out there covering a variety of performance bases and price points.

Below are our picks of some of the best track day cars that are currently on sale:

Despite its historic connections to successful classic rally cars, the modern day Alpine A110 is very much at home on paved roads and race tracks. All versions of this flyweight French sports car come with peppy performance, which in combination with the car’s light weight and nimble handling makes the Alpine A110 a hoot to drive on a track day.

If you’re already well versed in track days and are looking for something that can pound around a track lap after lap, then the range-topping 300hp Alpine A110 S may be the more suitable car for you. It’s a bit more powerful than the 252hp base model, and also has stiffer suspension to sharpen up the already responsive handling.

If you’re the sort of driver who thinks even the Alpine A110 is on the flabby side for a track day car, then you may want to instead consider something like the Ariel Atom. With barely any creature comforts and only a handful of body panels bolted onto the aluminium frame, the Ariel Atom is well and truly for the die-hard track day fan who’s after a thrilling drive.

The Atom also has the sort of performance to put even high-end supercars to shame. Being so light (the Ariel tips the scales at just 595kg) means the car has a monumental power-to-weight ratio of 537hp per tonne, which is in excess of every current Ferrari production car. Needless to say, the Ariel Atom is very quick.

If track-day-ready supercars were judged purely on the sounds they make, the Audi R8 would comfortably rank as one of the best you can currently buy. The R8’s sonorous V10 petrol engine sounds great regardless of whether you’re building up speed while you’re familiarising yourself with the track or pushing as hard as you can on your hot laps.

Of course, a track day car isn’t defined by its sound alone, so the Audi R8’s credentials are bolstered even further by lots of grip from the wide tyres and all-wheel drive system. Die-hard track day fans will probably want to opt for an R8 with the optional carbon ceramic brakes as they’re less prone to overheating after a committed track day session.

If you’ve ever been to a track day before, you’ll likely see plenty of Caterham Sevens, and it’s easy to see why. Their combination of nimble handling, punchy performance and relative affordability in this class makes it a very popular choice with drivers who take to the track on a regular basis.

Check out these new car deals

It helps, too, that there are a variety of Caterham Seven models to suit your budget and performance needs. The current Caterham Seven range starts off at 84hp models that are ideal for drivers who are dipping their toes into the track day scene, and top out at fearsomely fast 310hp models that cater for track day enthusiasts who are looking for high-speed thrills.

At the other end of the spectrum to the Caterham Seven is the Ferrari F8 Tributo. On top of being far more expensive than the Caterham, the Ferrari F8 packs an even more powerful engine, a considerably more sophisticated equipment list and – unlike the Seven – is civilised enough to be used every day if so required.

Where the two cars are similar, though, is in their ability as track day cars. Superb handling and superlative performance contribute to the Ferrari F8 Tributo being a properly thrilling car when you stretch its legs on a track day. The suite of driver assists also give the Ferrari F8 Tributo impressive approachability – just because the Ferrari is ferociously fast doesn’t mean it also has to be intimidating to drive.

One of the few flies in the Hyundai i30 N’s ointment has been the fact it isn’t the comfiest hot hatch out there. While it does feel a bit bumpy on the road due to its firm suspension, that stiff setup and the sharp handling it provides make the Hyundai a very capable hot hatch when it’s being taken out on a snooker-table-smooth race track.

With little body lean when cornering, responsive steering, lots of grip and a punchy turbo-petrol powertrain, the Hyundai i30 N has the hallmarks of being terrific fun if you’re after a hatchback that can also hold its own on a track day. Plus, being based on a mainstream family car, the Hyundai i30 N can also be used as your daily driver when it’s not being thrashed on a race track.

You’re well catered for if you’re after a high performance or track-focused sports car, but what if you’d prefer something a bit more approachable and user-friendly. Enter the Mazda MX-5, which promises on paper to be a fun and nimble little sports car that won’t bite the head off novices who are taking to the track for the very first time.

Peppy performance and revvy engines make the Mazda MX-5 a delight to work hard on track, which are complemented further by the car’s engaging and responsive handling. Perhaps the ace in the MX-5’s hand is its affordability – if you’re after something that offers a lot of fun for the money, few cars are able to topple the Mazda.

The Porsche 911 GT3 has long been a popular choice with track day drivers, and the latest iteration looks set to keep that tradition going. A quick look at the spec sheet makes it clear why the 911 GT3 is held in high esteem: there are grippy tyres, a motorsports-style suspension setup and a 503hp flat-six engine.

Thanks to the big rear wing, there’s also lots of downforce, which helps make the 911 GT3 even faster around corners than the regular Porsche 911. Depending on how deep your pockets are, you can turn the 911 GT3 into a wannabe racing car with roll cages and carbon fibre-backed bucket seats.

Radical is predominantly a maker of prototype-style roofless racing cars, though it has transferred some of its motorsports-derived know-how into a slowly growing range of road cars. One such model is the Radical Rapture, which despite its extreme looks is actually road legal.

With 350hp on hand, the Rapture is far from being a slouch, and the wings and splitters on the car’s bodywork generate lots of downforce so cornering speeds are high, too. You can make it even quicker around a track if you decide to spec the car with ultra-grippy slick tyres – though, if you also plan on using the Radical on the road, do bear in mind these slick tyres are not road legal.

The Toyota GR Yaris may have originally been envisioned as a homologation special for a rally car, though those credentials also lend itself to being a terrific track day car. Despite being a supermini at heart, the GR Yaris’ 261hp and 0-62mph acceleration time of 5.2 seconds make the Toyota faster than similarly-sized hot hatches like the Ford Fiesta ST and VW Polo GTI.

You can turn the GR Yaris into an even sharper track day weapon with the Circuit Pack upgrade. It doesn’t add any more power, but it does introduce stiffer suspension and front and rear differentials that help you put the car’s power down onto the road more effectively.

Are you looking for an easy way to change your car? Well you’re in the right place. Carwow is your one-stop-shop for both selling your old car, as well as getting your hands on a new one.

Selling your current car is easy with carwow. Simply take some photos, answer a few questions and our network of trusted dealers will make you the best offers on your car. You can then accept the best one, and the dealer will come and collect the car from your home at a time to suit you, and transfer the money straight into your bank account. It really is the easiest way to sell your car for what it’s really worth.

Getting a great deal on your new car is just as straight forward. You can configure your ideal model and compare all the latest and best offers from our trusted dealers, all in one place. Simply select the best deal for you and have the car delivered straight to your door.