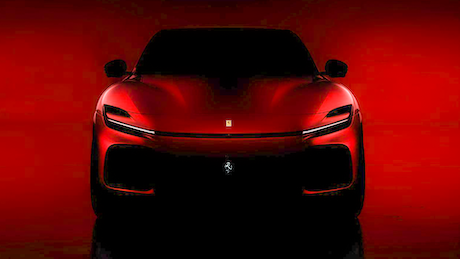 Is this what Ferrari’s all-new Purosangue SUV will look like? Read on for full details.

The new Ferrari SUV has been spotted testing, and it’s likely to be called the Purosangue. This will be the first high-riding four-door car the brand has ever made, and it should be revealed before 2023.

Ferrari has teased the new car’s design and all but confirmed it’ll come with a V12 engine – in top-spec trim at least. This new alternative to the Bentley Bentyaga Speed, Aston Martin DBX and Lamborghini Urus is set to arrive before 2023.

Ferrari has shared a video on twitter featuring cinematic, slow-motion shots of a V12 engine, along with the caption ‘A new #Ferrari is coming’.

The next Ferrari to break cover is set to be the eagerly anticipated Purosangue four-door luxury car.

Put these two tidbits of information together, and you can be fairly confident that this V12 engine is destined to live under the bonnet of Ferrari’s first-ever SUV, shown below in prototype form.

Although another official Ferrari posts refer to the engine as ‘a new V12’, it may end up sharing some parts with the V12 engine in today’s 812 Superfast GT car.

That two-door supercar produces 812hp. If the Pursoangue’s engine develops anything close to that, it’ll be in with a shout of edging out the 707hp Aston Martin DBX 707 and becoming the world’s most powerful SUV.

Ferrari isn’t expected to offer a hybrid V12 Purosangue SUV, on the grounds that adding electric motors and batteries to a car with an already hefty V12 engine would make it too heavy. Instead, a twin-turbo V8 hybrid could also arrive at some point.

It’s not known whether the Purosangue will be rear-wheel drive (like most other Ferrari models) or whether it’ll use a similar four-wheel-drive system as the (now off-sale) GTC4 Lusso.

Hybrid models may make use of a similar system to the SF90 supercar, where the V8 engine drives the rear wheels while electric motors power the front wheels.

Ferrari has done an excellent job keeping the new Purosangue SUV’s design under wraps – until now. The new teaser above clearly shows the new car’s headlights, bonnet and elements of the front bumper.

Spy shots of the Ferrari Purosangue show that it’ll closely match the teaser images in the metal. You can just about make out the slim and pointy headlamps, as well as the low-slung front bumper.

Fancy knowing what else is lurking underneath the camo? just check out these images, posted to Instagram by several accounts, including ‘actu.auto.fr‘ and ‘cullifornication‘. They appear to show what could be an undisguised pre-production Purosangue parked in a factory.

The low-slung sportscar behind it looks very similar to Ferrari’s SF90 hybrid supercar, suggesting some brave soul snapped this picture while working on Ferrari’s own production line.

A second photo reveals what the rear of this new super-SUV could look like.

It’s clear the front will look radically different from any Ferrari on sale today. It does, however, share some features with the Pursangue SUV imagined in our earlier renderings, shown below.

Upfront, you’ll spot similar headlights with daytime running lights cutting through in a similar fashion to those on the Ferrari Roma. It looks like the finished car will have a smaller, lower-mounted grille, however.

Although not visible in the leaked photo, it’s likely the Ferrari Purosangue’s roofline will likely look sleeker than the comparatively boxy Bentley Bentayga, as shown in our rendered image, above.

The thin LED rear lights look similar to those on the Ferrari 296 GTB, and aren’t a million miles away from the full-width lightbar on a Porsche Cayenne Coupe.

Inside the new Purosangue, you can expect to find all the usual Ferrari hallmarks – loads of leather, generous helpings of brushed metal trim and a healthy dose of carbon-fibre, as well as a new version of Ferrari’s infotainment system.

The new Ferrari Purosangue is expected to be the first modern Ferrari to come with five seats, although it’s likely you’ll be able to get a set of two individual rear seats if you’d prefer – like those in the GTC4 Lusso.

Looking for a fast family car but feel the need to splash out for a V12 Ferrari? Check out carwow’s pick of the best fast four-seat cars on sale now.

It’s possible that it could go on sale later this year, too. Although (as with most Ferraris) you can bet that plenty of wealthy petrolheads have already posted blank cheques to the Ferrari factory to make sure their names are first on the list for this new SUV.

If you’d rather wait for this new car to appear in showrooms, get ready to hand over at least £200,000 to park one on your driveway.

Can’t wait to get your hands on a new sporty SUV? Check out the fastest SUVs on sale or get help choosing your ideal new car.