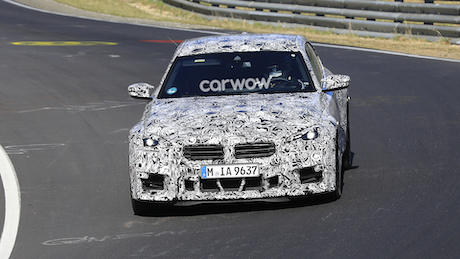 The new BMW M2 has been teased on Instagram ahead of its launch later this year. Read on for all you need to know.

The latest BMW M2 is on the way and, because it’s the 50th anniversary of BMW’s M division, it should be revealed at some point this year. This fast and fun coupe will be an alternative to hot hatches such as the Mercedes-AMG A45s and Audi RS3, and the Toyota Supra sports car.

This new sports coupe has been teased by BMW, and it looks as though it’ll be similar to the exclusive renders revealed last year. Watch the video above to check those out.

The new BMW M2 has been teased on Instagram wearing heavy camouflage, however you can make out some details which will differentiate it from the BMW M240i.

The huge gold wheels are brand-new for this prototype and they look similar to those found on the current BMW M3 Competition. You can also see a new rear spoiler protruding from the boot lid.

Down the side, you can also make out the wider wheel arches and sporty side skirts.

An exclusive carwow render last year (shown below) showed what the new M2 may look like, and the teaser seems to echo this design. The divisive kidney grilles of the current BMW M3 and M4 won’t be carried over to the M2.

The new BMW M2 is likely to mimic the new BMW M240i in terms of styling, with more sporty trinkets. The headlights will likely be carried over, however the M2 is expected to sit lower than the standard BMW 2 Series.

Changes to the rear of the car will be equally as racy, too. The tall spoiler seen on the teaser images is likely part of an M Performance pack, so you can expect to see a more subtle ducktail wing on the standard car.

Compare the best coupes on sale

It’s also highly likely that the M2 will get a rear diffuser, as well as the signature M car quad tailpipes.

While the regular BMW 2 Series coupe gets a range of three-, four- and six-cylinder petrol engines, the M2 will be available with something a bit brawnier.

It’ll likely use a version of the 3.0-litre turbocharged six-cylinder engine fitted to the BMW M240i, M340i and BMW Z4 M40i, while future competition versions may borrow the M3 and M4‘s engine instead.

You won’t see exact power figures revealed until closer to the launch of the BMW M2, but it’s definitely going to get more than the 374hp in the M240i.

The new M2 will likely be offered with the same xDrive all-wheel-drive system as the M240i, but it’s possible that it will be available with rear-wheel-drive as well.

If you go by the previous BMW M2, then a six-speed manual gearbox will be the standard option, with an automatic also available.

This may be the same eight-speed auto offered in the BMW M4. If an all-wheel-drive version is offered, this will likely only be available with an automatic.

The new BMW m2’s cabin should mimic that of the M240i pretty closely (shown above). This would mean a mixture of physical buttons and touchscreen controls, a digital driver’s display and BMW’s latest iDrive system.

The M2 should get plenty of sporty features inside to separate it from the standard 2 Series. You can expect a chunky steering wheel, M-specific graphics and heavily bolstered sports seats. You may even be able to get the same carbon fibre seats from the BMW M5 CS.

There’s no official word yet from BMW on when you’ll get to see the new M2 Coupe, though it’ll likely be unveiled in 2022 in line with the 50th anniversary of BMW’s M division.

Prices are also being kept under wraps for now, but don’t be surprised if the new M2 ends up being a little dearer than the current car.

Standard M2 Coupes could set you back more than £50,000 (that’s around £5,000 more than today’s M2) while high-performance Competition and CS variants will be pricier still.

Can’t wait for the new BMW M2? Compare the latest BMW deals or check out carwow’s pick of the top 10 coupe cars on sale now. You can also now sell your car through carwow. It’s quick, easy and free, and our trusted dealers will offer you the best price.