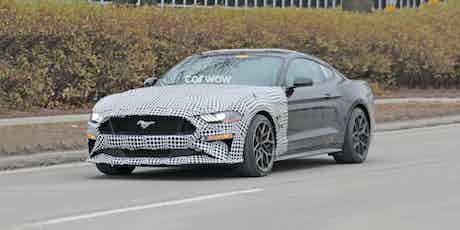 A new Ford Mustang is on the way. It could be the first Mustang ever to come with both a hybrid V8 engine and four-wheel drive. Read on for full details.

The next Ford Mustang has been spotted in prototype form. This alternative to the likes of the Toyota Supra, Jaguar F-Type, BMW M4 and Mercedes-AMG C63 could be about to lose its signature rear-wheel-drive layout in favour of a grippier four-wheel-drive system when it goes on sale around 2023.

The prototype car in these pictures comes with the same body as the existing Ford Mustang because this specific test car is being used to evaluate the next Mustang’s mechanical components. When the new car is revealed, it’s possible it’ll take inspiration from the recently launched Mustang Mach-E electric car.

It’s likely the new Mustang will keep its time-honoured two-door coupe shape, but there’s a strong chance its gaping front grille could make way for something sleeker and more modern. It’ll still have some form of petrol engine under the bonnet so it won’t go fully grille-less like the Mach-E (shown above), but you can bet it’ll look very different from today’s car.

Ford is planning to launch almost 18 hybrid vehicles by 2022, and there’s a strong chance the next Mustang may come with a hybrid V8. A patent filed by Ford in 2017 showed a hybrid car featuring a V8 engine driving the rear wheels and a pair of electric motors  – one to drive each of the front wheels. This setup may make its public debut in the new Mustang replacement.

Such a setup wouldn’t just make the new car the first-ever hybrid Ford Mustang, it would also make it the first four-wheel-drive Mustang since the car was introduced in 1964. This move would mirror the latest BMW M3 and M4 models, which are available with BMW’s xDrive four-wheel-drive system for the first time.

Like those cars, however, there’s a strong chance that the new Ford Mustang will also be available with a simpler, non-hybrid V8 setup with solely rear-wheel drive. Although, there’s no guarantee that such a model could pass the latest (and most strict) Euro 6d emissions rules, which could mean this version isn’t offered in Europe and the UK.

Ford may also decide to develop a replacement for the current 2.3-litre four-cylinder Ecoboost Mustang model, which could see the addition of a hybrid-drive system to help boost fuel economy and cut CO2 emissions.

The new Ford Mustang isn’t expected to appear until 2022 at the earliest, and it’ll probably be 2023 before you can walk into a dealership and buy one.

Adding hybrid tech to the new Mustang will almost certainly make the new car more expensive than the outgoing model, however. Entry-level four-cylinder hybrid Mustangs could set you back around £40,000, while V8 models will cost closer to £50,000.

Can’t wait until 2023 to get your hands on a new sports car? Check out the latest Ford Mustang deals available through carwow or compare the best sports cars on sale now.