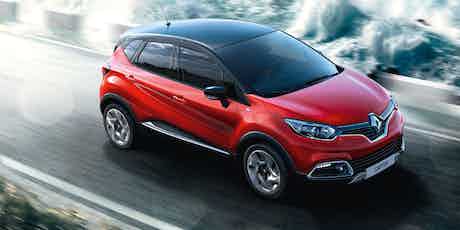 Renault brings a touch of technology and quality to the good value Captur range with a new ‘Signature’ trim. What do you get for your money?

It’s a new top-spec model for Renault’s Juke-alternative small crossover, the Captur. Dubbed the Captur Signature, it adds as many toys to the car as Renault can get away with while still keeping the price the right side of £20k.

Nothing per se. There’s a whole stampede of additional features though, some of which won’t be available on any other Captur. To create the Signature, Renault starts with the Dynamique S MediaNav model and goes upgrade crazy. On the outside there are 17-inch alloys with black inserts, there’s chrome detailing on the side strips, boot lid, grille and foglights and the two-tone paint scheme comes in exclusive Flame Red metallic – though five other colour options are available. The inside gets part-leather trim, with the interior Red Touch pack as standard. On top of the R-Link infotainment system there’s now a rear parking camera too.

The same selection of engines as the rest of the Captur range remains available. That’s a 0.9-litre, 89hp petrol, a 1.5 litre, 89hp diesel – with automatic EDC transmission as an option – and the 1.2-litre, 118hp petrol which is auto only. The manual diesel gives a 95g/km emissions return for zero-rate VED (road tax) and 78.5mpg on paper.

The Captur exists to take on its sibling, the Nissan Juke. It’s pitted pretty well against the Juke Tekna for price and tech, though the Juke sports the natty Around View Monitor camera system (which uses external cameras to display a 360-degree view on the car’s display) and bigger, more powerful engines. There’s other rivals in this small crossover sector, in the form of the Peugeot 2008 and Skoda Yeti. There’s the Vauxhall Mokka too, but that already struggles to compete for price and equipment.

Not quite the bargain of its lower-spec stablemates, but a much-needed gizmo boost nonetheless.