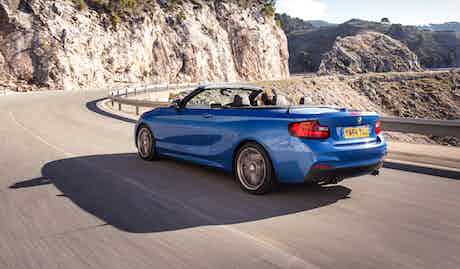 The Audi A3 Cabriolet is arguably the new car’s nearest competitor, so does it have what it takes to dislodge the Audi from the head of the class. We take a look at the five key areas where the 2 Series has improved for 2015.

Looks-wise, the 2 Series Convertible looks much like the latest 2 Series Coupe but, obviously, without the roof. Compared to the old 1 Series cab, buyers will find slimmer headlights on either side of a wider front grille, and a longer, sleeker body continuing to the updated rear end.

In order to compensate for the rigidity lost with the roof, BMW’s boffins have improved torsional rigidity and body stiffness by 20 and 10 percent respectively. This should mean, out on the open road, there is almost no difference between the convertible and the coupe.

Three petrols and one diesel will be available in the 2 Series, all of which are an evolution of the units found in the 1 Series. The 220d is equipped with a 190hp 2.0-litre turbodiesel capable of returning a claimed 64.2mpg when equipped with an automatic transmission. Despite those impressively frugal figures, it can still accelerate from 0-62mph in 7.4 seconds. Carbon dioxide emissions are as low as 116g/km, resulting in a yearly road tax bill of just £30.

The petrols aren’t quite as frugal, but they have the potential to deliver impressive performance. The base 220i offers similar acceleration figures to the 220d, while the more powerful 228i makes use of its 245hp power output to hit 62mph around the six-second mark.

Fans of high speed, open-top thrills should look no further than the M235i. With a turbocharged 3.0-litre straight-six engine, the 326hp machine will smash through the 0-62mph sprint in 5.0 seconds, on to a limited top speed of 155mph.

In order to keep all that power in check, M Sport suspension and brakes are fitted as standard, while a more aggressive styling package sets the model apart from the rest of the range. We’re so keen on the M235i that we named it as one of our top ten convertibles for 2015.

Each model in the range comes with a generous levels of kit, including alloy wheels, auto air conditioning, keyless go, sports front seats and a leather steering wheel. Further up the range, luxury models gain larger alloys and leather seats (we’d say this is a ‘must have’ option for a cabriolet) and wood trim on the dashboard. M-Sport variants gain 18-inch alloy wheels, an M-Sport exterior body kit and a Harmon/Kardon audio system.

The BMW 2 series convertible will be priced from £29,180 for the 220i Sport, climbing to £37,710 for the most potent M235i. The full range goes on sale this Saturday but, in the meantime, take a look at our reviews of the car the 2 Series needs to beat – the Audi A3 Cabriolet and the Mercedes SLK.