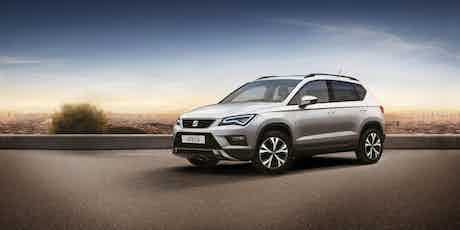 The SEAT Ateca will be offered from launch in a special First Edition trim level. Just 200 examples of the unique version of the Kia Sportage-rivalling crossover will be available to UK buyers.

Head over to the SEAT Ateca deals page to find out more about the latest model from the stylish Spanish brand. For more options, check out our list of the best SUVs on sale.

The First Edition is based on the Ateca SE but gains a heap of extra goodies to help it look more fancy on the outside and feel more plush on the inside.

The most obvious upgrades to the exterior compared to the SE are the new 18-inch alloy wheels, finished in two-tone silver/grey. The rear windows are tinted, while the roof rails and window surrounds are painted black. Three body colours are available to choose from – Nevada White, Rodium Grey and Samoa Orange.

Inside, the cabin gains an eight-inch touchscreen infotainment system equipped with satellite navigation. Parking is made easier courtesy of both rear parking sensors and a reversing camera, and the boot lid is electrically operated via a wave of a foot beneath the rear bumper. A keyless entry and go system rounds off the upgrades.

Both petrol and diesel power are offered for the Ateca First Edition. The petrol option comes in the shape of a 1.0-litre turbocharged unit, while the diesel is a 65.7mpg-rated 1.6-litre. Both engines produce 113 hp.

Orders for the Ateca begin on 1 June 2016, while first deliveries will begin on 9 September.

Save money on your new SEAT Ateca

Try our SEAT Ateca car configurator to get a great deal on your new car. If you’d like to scout the crossover competition before placing your order, our car chooser tool can help you find your ideal model.