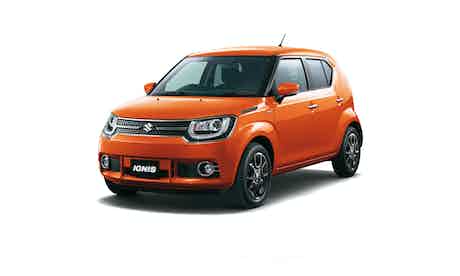 Suzuki has confirmed its compact Ignis SUV will go on sale in the UK in 2017. Read on for full details on this characterful crossover…

Suzuki has confirmed its new Ignis crossover will go on sale in the UK in 2017. This compact off-roader will be offered alongside the existing Jimny, but should come with distinctly more modern engines and upgraded equipment levels to help it compete with the likes of the Fiat Panda 4×4. Read on for everything we know so far…

Elements of the new Ignis appear to have been inspired by the original Suzuki Cervo. This compact two-door hatchback was originally introduced in 1976 and featured a similar broad grille stretching between the headlights and the same signature slashes on the rearmost pillar.

Although these images show a Japanese-spec Ignis, we don’t expect UK market versions to differ significantly. The front and rear bumpers may be modified to accept wider UK number plates but the boxy styling and chunky details will probably be carried over unchanged. Some reports suggest Suzuki will develop a more off-road focussed version with beefier bumpers and a raised ride height, too. These models may not reach the UK, however.

The new Ignis interior is colourful and full of funky design details. The three slashes that form part of the exterior C-pillar are mirrored on the colour-coded centre console while a large tablet-like infotainment screen dominates the two-tone dashboard. Its minimalist cabin features a simple row of toggle switches and two rotary dials to control the heating and air conditioning while the instrument cluster is neatly tucked beneath a carbon fibre-effect shroud.

We expect the new Ignis to boast enough room for four adult occupants – due to its compact size, however, legroom and shoulder width may leave a little to be desired should you wish to carry a full complement of passengers. It’s unlikely this new Suzuki will lead its class in terms of boot space but we do expect it to muster a carrying capacity of approximately 300 litres.

City cars tend to be quite entertaining vehicles to drive and, although the Ignis looks like it has a higher centre of gravity than some, we suspect it’ll be able to provoke a smile or two as long as you don’t push it too hard. Its natural home will be on city streets and not the motorway, although optional four-wheel drive could see it gain some fans among those living in more remote areas.

Information about the engine line-up is still unclear but, in Japan, the Ignis engine is a 1.2-litre unit with a CVT automatic gearbox. In the UK, most buyers will favour a manual gearbox and the proposed turbocharged 1.0-litre three-cylinder engine could be the best choice for keen drivers. There’s also the potential for a full or mild hybrid, that would offer very low running costs.

Given that both the Suzuki Vitara and SX4 S-Cross cost from £13,999, the Ignis will certainly be a value-packed proposition. Considering its small size and reasonably limited practicality, we’d be surprised if the Japanese company priced its new car much more than £10,000 – that’d give Suzuki a real competitor to the likes of the Dacia Duster, currently the cheapest crossover on sale.

Check out our exhaustive Ignis specifications guide and, when you’re finished, why not see how much you could save on our Ignis deals page?