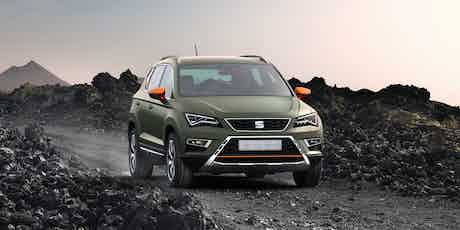 SEAT has announced a robust, off-road biased version of its Ateca SUV, featuring a number of visual enhancements and plenty of standard kit

Just as the SEAT Ateca hit UK showrooms, the Spanish manufacturer has announced a special edition dubbed the Ateca X-perience. The military style green finish is one many indicators pointing towards its more off-road bias than the regular model.

Differences between the regular Ateca and the X-Perience are almost entirely aesthetic. The chunkier looks echo an archetypal 4×4 look while bits of chrome on the roof rails, headlight surrounds and door handles complement with the orange accents dotted about. The paint itself is scratch resistant.

A nature-inspired palette of hues continues in the Ateca’s interior. Suede leather, green and brown seats are completed with contrasting orange stitching, which also features on the steering wheel and gearstick gaiter. Bringing the outdoor theme inside is olive green panelling to match the seats and exterior.

The X-Perience’s spec sheet is satisfyingly long with emergency braking, self parking and a 360-degree camera with bird’s eye view all featuring. The infotainment system is controlled via an eight-inch touchscreen boasting Android Auto and Apple CarPlay compatibility.

The current range-topping 190hp 2.0-litre diesel drives all four wheels via a part-time four-wheel-drive system. While off-road, drivers will be able to keep their hands firmly on the wheel thanks to a seven-speed, dual-clutch automatic gearbox. If drivers want that extra degree of control back on the road, they can shift through the gears via steering wheel mounted paddles.

Assuming it’ll offer a similar driving experience to the regular the Ateca, we’d expect a slightly firm ride with very composed handling. The trade-off, however, is ride quality worse than the rivalling Volkswagen Tiguan and Nissan Qashqai.

The rough and ready SEAT Ateca X-Perience will be introduced to the public at the 2016 Paris Motorshow and will probably go sale in early 2017. Prices are expected to be higher than the regular Ateca so an entry-level cost of around £22,000 seems plausible.