News Brabus builds new tuned Porsche and Rolls-Royce: what you need to know

Brabus builds new tuned Porsche and Rolls-Royce: what you need to know 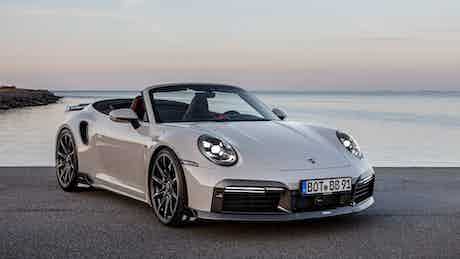 Brabus is best known for exclusively making tuned Mercedes models, however it’s now branched out to Porsche and Rolls-Royce. Read on for all you need to know.

Tuning firm Brabus has come out with a raft of bonkers new models, including a tuned Porsche 911 Turbo S and even a Rolls-Royce Ghost.

It’s also worked its magic on the electric Porsche Taycan. This is the first time Brabus has ever worked with brands other than Mercedes.

The new Brabus 820 is based on a Porsche 911 Turbo S Cabriolet, but there are plenty of changes to make it stand out from the standard car.

There are plenty of visual changes to make the Brabus 820 stand out as well. You get a new Carbon Fibre rear wing, fins in front of the rear wheels and plenty of carbon fibre. Step inside, and you’ll notice the red trim all over the cabin and tonnes of quilted leather.

If you want a touch more luxury, the Brabus 700 may be more your style. It’s based on the relatively subtle Rolls-Royce Ghost, but this is no longer an understated luxury saloon…

The 700 gets a carbon fibre splitter, spoiler and diffuser. There’s also an uprated exhaust system and loads of carbon fibre in the cabin.

The engine is based on the same 6.75-litre V12 you get in the standard Ghost, however it now has 700hp as opposed to the normal car’s 562hp.

The new Brabus Crawler is based on a Mercedes G Wagon but there isn’t much of the donor ‘G’ left.

That’s because Brabus has turned it into an off-road buggy. The doors have come off, as has the roof, and an external roll cage has been welded on. The little bodywork that remains has been re-worked in carbon fibre.

The top speed has been limited to just 99mph. Thanks to the massive tyres and 53cm of ground clearance, however, the Crawler will do 99mph over any terrain.

It’s not just mad V8 and V12 cars that Brabus has worked its magic on; the Porsche Taycan Turbo S EV has been given a once-over as well.

Most of the upgrades here are visual. The suspension is lowered by 20mm to make the car look more aggressive, and you get new 22-inch forged alloy wheels.

There’s also a new carbon fibre splitter, new side skirts and a new rear bumper with a custom diffuser.

Step inside, and you’ll find even more carbon fibre on the dashboard, as well as a new steering wheel and quilted leather seats. If you’re not a fan of the neon green trim, you can customise it any way you want.

As is the case with customised cars, the sky’s the limit in terms of pricing. You can easily spend over £280,000 on a Brabus Taycan Turbo S.

It shares a lot of components with the Brabus Crawler but the doors, roof and unique pickup-truck bed are completely different. It doesn’t get the same suspension of massive off-road tyres though.

Inside, you get plenty of red trim and carbon fibre, but you could probably have the cabin finished in any colour you want – for a price.

At £660,000, the 900 XLP seems like a bargain compared with the Crawler, but you need to be quick because Brabus is only building 10 of them.

Looking for an easy way to change your car? Then head over to carwow. You can sell your car, and get a great deal on a new one, all through our network of trusted dealers and all from the comfort of your own home. Tap the button below to get started today.