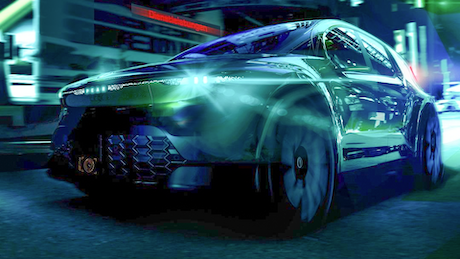 Fisker has teased a new small electric SUV called the Pear, and it’ll go into production in 2024. Read on for all you need to know.

American car maker Fisker has announced its second car, the Pear electric SUV. It’ll be smaller than the current Fisker Ocean and may cost less than $29,900 (£23,800).

This alternative to the Audi Q4 e-tron and Tesla Model Y should go into production in 2024.

This teaser image is your only glimpse for now of what the Fisker Pear will look like. It appears to have a short bonnet with a slim light bar up front, as well as some large air intakes lower down.

It looks as though it has a bubble-like side profile, a bit like a pear funnily enough. You can also see some flared wheel arches to make it look more muscular.

Virtual door mirrors seem to feature on this concept car, as well as flush-fitting door handles. It’s unclear how much of this will make production, though.

Being such an early concept, there are no details yet on the battery options for the Fisker Pear, however it’s likely to share components from the Fisker Ocean SUV.

That car has two battery options, one offering 350 miles of range and a ‘Hyper Range’ option which can do 390 miles. Being a smaller car, the Pear may be able to do up to 400 miles on a charge.

As for performance, the Pear may get the same 275hp motor as the base model Ocean. That car also has a 550hp motor option which may be carried over to the Pear.

It’s unclear whether we’ll see the Pear in the UK. The Fisker Ocean is meant to be coming to Europe this year, so there’s a chance we’ll see the brand come to our shores.

Looking for a great deal on a new electric car? Then head over to carwow. Not only can you get a great dal on a new car, you can also sell your old one through our network of trusted dealers. It’s quick, easy and you don’t even have to leave your sofa. Tap the button below to get started today.