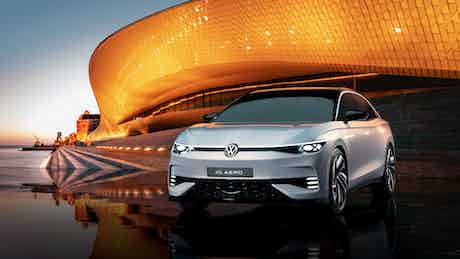 The new Volkswagen ID Aero has been revealed, the first electric saloon to come from the brand. Read on for all you need to know.

Volkswagen has revealed the new ID Aero concept. It’s a mid-sized electric saloon which will be an alternative to cars such as the BMW i4 and Tesla Model 3.

It’ll share a lot of components with other electric cars in the Volkswagen range, and is due to go on sale in the second half of 2023.

The new Volkswagen ID Aero clearly takes inspiration from other cars in the ID lineup. At the front, you can see a similar full-width light bar to the one found on the Volkswagen ID4.

At almost five metres long, this new saloon is around the same size as a Mercedes EQE. Looking from the side, you’ll notice the 22-inch alloy wheels and sporty sloping roofline.

The rear end design is pretty fuss free. There are no fake vents here, just a full-width tail light assembly with a funky looking honeycomb pattern.

The Volkswagen ID Aero is going to share a lot of parts with other cars in the ID range, such as the ID4.

It’ll use a 77kWh battery as standard, with a claimed 385 miles of range. This is partly due to a new aerodynamic design which reduces drag.

There’s no word on performance yet, however it may well use the same dual-motors from the ID4 GTX, putting out 299hp to all four wheels.

No images have been released of the new Volkswagen ID Aero’s interior, however you can expect it to adopt similar features to the ID3 and ID4.

Watch Mat review the Volkswagen ID4 for an idea of what the interior of this new car could look like.

This would mean a minimalist design with a small digital drivers display, and most of the car’s functions being operated through a central touchscreen.

The new Volkswagen ID Aero is due to go on sale in Europe by the second half of 2023.

As for price, that hasn’t been formally announced yet. You can expect it to cost a bit more than the Volkswagen ID4 though, with prices likely to start at around £45,000.

Can’t wait for the new Volkswagen ID Aero to go on sale? Check out deals on electric cars though carwow. You can also now sell your car through carwow. It’s quick, easy and you’ll be offered a great price. Tap the button below to get started today.