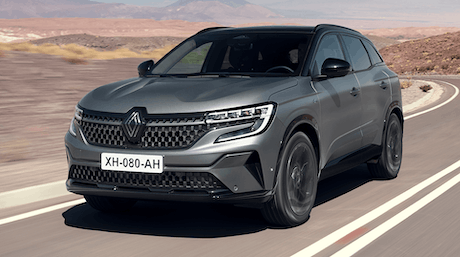 A new SUV is joining Renault’s ever-growing lineup, dubbed the Austral. It’ll go on sale late in 2022. Read on for full details.

You’re looking at the new Renault Austral, the latest SUV to come from the French manufacturer.

This family-sized car will take on alternatives like the VW T-Roc and Volvo XC40 when it hits showrooms in late 2022.

It’s clear to see that the Renault Austral will continue to the new design trends of the latest Megane.

Upfront, it gets sleek pincer-like LED headlights wrapping around a honeycomb grille that houses that giant old-school Renault badge.

Sharp creases and a two-tone roof add some character to the side of the car with a sweeping LED lightbar — just broken by the badge — stretching across the rear. You’ll be able to get alloy wheels ranging from 17- to 20-inches, too.

Making a debut on the Austral (before almost certainly heading to other Renault models) is the Espirit Alpine trim. Inspired by the Alpine sports car brand, it brings a sportier look to the SUV.

Key to the Renault Austral’s interior is more tech borrowed from the Megane. Two 12-inch screens house a Google-based infotainment system that fully incorporates Google Maps and other Android apps.

You’ll also have the option of a 9.3-inch head-up display for more info that can be projected onto the windscreen.

As for the cabin itself, its design is inspired heavily by the Megane too. It gets a similar split material design for the dashboard, with this particular car showcasing a mix of leather and wood. You’ll also be able to have it decked out with high-quality fabrics or Alcantara depending on how you spec it.

Petrol mild-hybrid versions of the Renault Austral will offer 500 litres of boot space, too. No confirmation yet 0n the plug-in hybrid, which could take a hit in storage space as a result of its extra batteries.

At launch, the Renault Austral will come with the choice of plug-in hybrid or petrol engines. There isn’t a pure electric version yet, but Renault may develop one later down the line.

Plug-in hybrid versions are powered by a 1.2-litre three-cylinder engine linked up to an electric motor, combining to produce 200hp.

Petrol versions use the same engine, albeit with a small ‘mild-hybrid’ 48-volt boost instead of a full hybrid system. This produces 130hp.

The Renault Austral will go on sale later in 2022, so it shouldn’t be too long before UK pricing and specs are confirmed.

Expect it to be priced between the smaller Captur and larger Kadjar SUVs. Somewhere in the £23,000 ballpark should be expected.

Keen for a new SUV? Compare the latest available through carwow