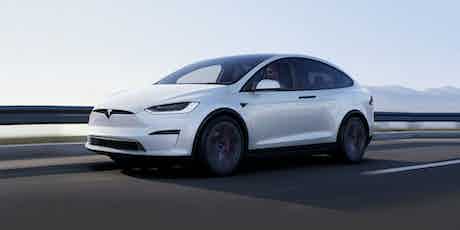 A refreshed Tesla Model X has been revealed, with the SUV featuring an overhauled interior and a new 1,020hp Plaid model. Read on to find out more.

The Tesla Model X has been one of the most impressive all-round electric cars on sale. It’s a seven-seat SUV with space-age doors and the performance to embarrass sportscars.

With the likes of the Jaguar I-Pace, Audi e-tron and Mercedes EQC playing catch-up though, it’s going to take a lot to keep the Model X at the front of the pack. To do just that, the Tesla Model X has been refreshed for 2021 to bring a radical new interior, a 360-mile-capable Long Range model  and a 1,020hp ‘Plaid’ performance version.

The new Model X has some subtly redesigned air vents in the front bumper (to match the updated Tesla Model S) and you can now choose to replace all the car’s chrome with black trim if you prefer.

Inside, the Model X features a radical new steering wheel that looks more like it’s been pinched from a commercial airliner than something you’d expect to find in a car, with no stalks for the lights or windscreen wipers.

There is no rule in the UK stating that a car’s steering wheel has to be round, so it’s possible both this yoke-style design (and a conventional round wheel Tesla has also produced) will be offered on new UK-bound Model X cars.

The Model X also gets a new 17-inch infotainment display, which can be tilted towards the driver or passenger depending on who’s using it, with a separate 8-inch system in the back to keep passengers entertained. Speaking of which, you can still get the Tesla Model X with five, six or seven seats.

Headlining the changes to the Tesla Model X is the new Plaid triple-motor option. This delivers 1,020hp to all four wheels, resulting in a 0-60mph time of 2.5 seconds and a 163mph top speed. It’ll manage 340 miles between charges, too.

A Long Range version is also available, offering 360 miles between charges. The dual-motor setup means 0-60mph rises to 3.8 seconds, but then it is significantly cheaper. Speaking of which…

Tesla is now taking orders for the updated Model X in Plaid and Long Range forms. Deliveries aren’t expected until 2022, though.

Can’t wait until 2022 to get hold of a new EV? Compare the best electric cars on sale now or check out the latest Tesla leasing deals available through carwow.