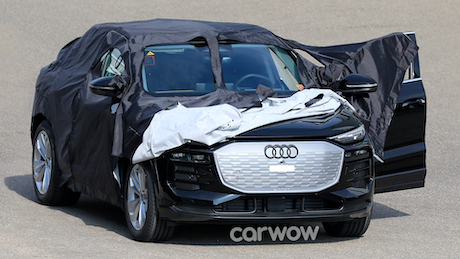 The new Audi Q6 e-tron prototype has been spotted testing with the front end exposed. This fully-electric SUV is expected to be smaller than the current Audi e-tron and will likely go on sale at the end of 2022.

The new Audi Q6 e-tron prototype has been spotted with no camouflage up front. This new electric SUV will sit below the larger Audi e-tron and will be an alternative to the Mercedes EQC, Ford Mustang Mach-E, and the upcoming Porsche Macan EV.

These latest spy shots of the new Audi Q6 e-tron are the most revealing yet, with the whole front end on display.

The Q6 e-tron will get a similar grille to other electric models such as the Audi Q4 e-tron, along with some stacked headlights.

These will likely come with various graphics options displayed on their pixel-like LED innards, as shown on the Audi RS3 and the A6 e-tron concept.

The large radar sensor in the lower bumper hints at some high-tech driver-assistance features, too. You can expect different-coloured grilles to be offered on the new car depending on which trim level you pick, too.

Both the undisguised prototype and these heavily camouflaged test cars (above) have traditional door mirrors. It’s likely that you’ll be able to get the Q6 e-tron with the digital rear-facing cameras like on today’s Audi e-tron SUV.

The rear of the new Audi Q5 e-tron appears to take inspiration from the smaller Q4 e-tron, with the sloping roofline and slim LED lights. It’s likely that these will be connected by a full-width light bar as well.

The new Audi Q6 e-tron will be based on an updated version of the Audi e-tron GT’s platform, which will also be shared with the new Porsche Macan EV. It’s also expected to have a 100kWh battery pack.

Get more info on the new A6 e-tron

This is the same technology that debuted in the Audi A6 e-tron concept, which has a claimed range of 435 miles. You can expect the Q6 e-tron to have a slightly shorter range due to its increased weight and less aerodynamic shape, likely around 400 miles.

Motor options are predicted to be shared with the A6 e-tron as well. These include single and dual motor variants, possibly with as much as 476hp and 800nm of torque. It’s predicted that the Q6 e-tron will have an 800-volt electrical system that’ll be able to charge from flat to 80% in just 25 minutes.

The new Audi Q6 e-tron is likely to share much of its interior design with the Q4 e-tron with a bit more space and a few extra luxurious touches (it will be more expensive, after all.)

Expect to see plenty of recycled materials, as well as a squared-off steering wheel with touch-sensitive buttons like the one you’ll find in the Q4 e-tron.

It’s also a safe bet that the Q6 e-tron will have a completely flat floor, which will save the rear seat passengers from squabbling over foot space.

It’s predicted that the Q6 e-tron will have an augmented reality head-up display as well, so directions from the sat-nav will be displayed on the road ahead.

The Audi Q6 e-tron may go on sale towards the end of 2022, just ahead of the A6 e-tron saloon. It’s expected to be priced below the current e-tron electric SUV at around £60,000.

Can’t wait for this new EV to go on sale? Check out the top 10 best electric cars or compare the latest Audi deals available through carwow. If you’re looking to sell your car, you can now do it through carwow. Just upload a few photos and answer some questions, and our trusted dealers will come back to you with great offers for your car. Tap the button below to get started.