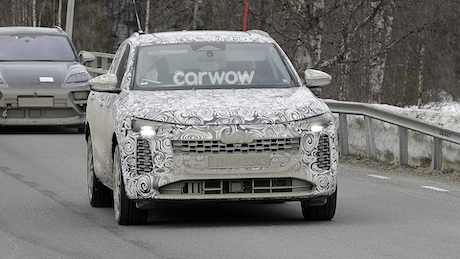 The all-new Audi Q5 SUV has been spotted testing ahead of its launch next year. Read on for all you need to know.

The revamped Audi Q5 SUV has been spotted testing, and it should go on sale in 2023.

This alternative to the BMW X5 and Mercedes GLC is expected to be offered with petrol, diesel and plug-in hybrid engines.

These photos are the first time the new Audi Q5 has been caught on camera but it hasn’t been fitted with a great deal of camouflage to hide its all-new design.

For example, it appears as though this Q5 will still get Audi’s huge grill up front. You can also make out some lower air intakes and slim new LED headlights.

The overall proportions don’t look as though they’re going to differ much from the outgoing car. This prototype has the same boxy shape as today’s Q5.

Get more info on the Q5 Sportback

A slinkier Audi Q5 Sportback version may come along at a later date. You’ll be able to tell it apart from the standard car thanks to its coupe-like roofline and redesigned rear end with new brake lights.

The circular taillights on this prototype are likely just test units to hide the full-width light bar. This will probably look similar to the one found on the Audi Q4 e-tron electric car.

Compare the best SUVs on carwow

There’s no word on what engines will be available on the new Audi Q5, however Audi has said that they will continue to make diesel engined models until 2025 so there could be diesel variants on offer.

It’s highly likely that the new Q5 will be offered as a plug-in hybrid, as well as the usual petrol options.

A sporty Audi SQ5 could also be on the cards, but you’ll have to wait a little while after the standard car’s gone on sale to get your hands on one of these high-performance models.

No images have surfaced of the new Audi Q5’s cabin, however you can expect it to take inspiration from the latest cars in Audi’s range.

If the Q4 e-Tron is anything to go by, the new Audi Q5 will get two large screens and a multi-layered dashboard with plenty of glossy trim to liven the place up.

It’s likely that the new Audi Q5 will be released at the start of 2023, with sales starting towards the second half of the year.

As for price, it’s a bit early for that to be announced. You can expect it to cost more than the current Q5, somewhere around the £50,000 mark seems likely.

Can’t wait for the new Audi Q5? Check out deals on the current car. If you’re looking for an easy way to change your car, you can do just that through carwow. You can sell your car and get a great discount on a new one, all from the comfort of your sofa. Tap the button below to get started.