What is a Plug-in hybrid electric vehicle (PHEV)? 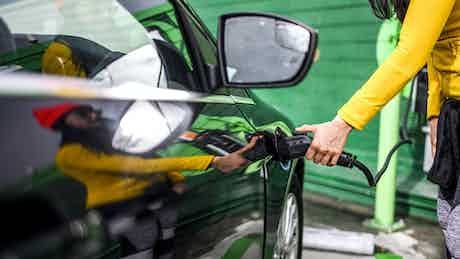 They offer the zero-emission benefits of electric cars on shorter journeys, but with the convenience and quick refuelling of a petrol or diesel engine for longer journeys.

Is a PHEV right for you? Read on for this handy guide…

How does a plug-in hybrid car work?

A PHEV is similar to a conventional ‘self-charging’ hybrid car, but instead of a small battery that’s charged by the car’s petrol or diesel engine, it has a larger battery that you can plug into a dedicated electric-car charger.

The bigger battery in most PHEVs has the added bonus of giving you a greater electric-only range than most conventional hybrid cars. On average, a PHEV can go between 20 and 30 miles before the petrol engine kicks in and takes over but some can cover more than 50 miles.

While the engine will charge up the battery slightly to give you a boost where needed, you’ll need to plug your PHEV into a charge point to realise its full potential. You can charge it from a household 3-pin plug or you can have a fast charger installed at your home.

What are the advantages and disadvantages of plug-in hybrid cars?

There are a few factors to consider before buying a PHEV:

Advantages of a plug-in hybrid:

Disadvantages of a plug-in hybrid:

What are some of the best plug-in hybrid cars on the market?

The BMW 330e is a posh feeling PHEV that’s great to drive and spacious enough for all the family. It has a 2.0-litre petrol engine paired with an electric motor to produce 292hp. It can do an impressive 40 miles on electric power alone.

Prices start at around £41,000, but you can save on that if you buy through carwow.

The Range Rover Evoque is a good-looking SUV with an upmarket interior and loads of standard equipment. Throw in the increased economy of this plug-in hybrid version and you really do have the full package.

A full charge will get you around 40 miles of range before the petrol engine kicks in. Prices start from around £46,000, but if you want to save some cash then head over to carwow and get offers back from trusted dealers.

Practicality and value for money make the Skoda Superb iV an appealing choice for family buyers. It has a huge boot and loads of kit on board as standard. You’ll get around 40 miles of electric range which is plenty for most people’s morning commute, and with prices starting from £37,845 for the PHEV version it’s a lot of car for the money.

You can save money by clicking the button below to configure your Skoda Superb through carwow.

For a full list of the best plug-in hybrid cars on the market, click the green button below.

Are there any government grants available for plug-in hybrid cars?

Until recently, plug-in hybrid cars were eligible for the Government’s Plug-in Car Grant, a scheme that now offers a £1,500 discount on a new electric car. Unfortunately, recent changes to the scheme have made it more selective – no manufacturer currently makes a PHEV that qualifies.

The good news is that you can still qualify for a grant under the Electric Vehicle Homecharge Scheme (EVHS) which can go towards the cost of installing a charger at your home.

The EVHS provides a 75% contribution to the cost of installing a charging point at your home, capped at £350. All you need to do is have a qualifying car and off-street parking at your house.

Are plug-in hybrids worth it?

This really depends on what you need a car for. A PHEV is a great choice if the majority of your journeys are less than a 40-mile round trip, but you still need to be able to do the occasional long-distance drive.

This way you get the cheap running costs of an electric car day today, but you don’t have the range anxiety on longer runs you may get with a pure EV.

If you spend most of your time in the car slogging up and down the motorway for hundreds of miles at a time, you may be better off with a conventional petrol- or diesel-powered car. Due to the extra weight of the batteries in a PHEV, they tend to be worse on fuel once the batteries are flat than a non-hybrid car.

If all you need is something for short trips or anything less than 200 miles all around, it may be worth going fully electric. This way you get the full benefits of zero-emission motoring all the time, and you may qualify for a £1,500 grant from the government towards the cost of a new EV.

Can a plug-in hybrid run on electricity only?

Yes, as long as you keep it charged up. Typically, a PHEV will have an electric-only range of between 20 and 30 miles, but some can manage around 50 miles before they need to use their onboard petrol or diesel engine.

Do plug-in hybrids charge while driving?

The engine in a PHEV will charge the batteries slightly to give you a boost when you need it, but due to the larger battery pack, it won’t charge all the way up. You need to plug your PHEV in to get the full zero-emission benefits that come with it.

What happens if you don’t charge a plug-in hybrid?

It is possible to drive your PHEV without charging it, but it defeats the point of owning one. Your fuel consumption will be much higher than the manufacturer’s claimed figure because the engine is designed to work in tandem with a charged battery and electric motors – not on its own.

How much does a plug-in hybrid cost to buy?

A PHEV will cost more to buy than a traditional petrol or diesel car due to the extra batteries and electric components. However, over the time you own the car you may save enough money on running costs that it outweighs the initial outlay.

How much does a plug-in hybrid cost to run?

This depends on what you use your car for. If you’re mainly using it around town on electric power alone, this is where it will be the cheapest. On average, running an electric car will cost you 5p per mile, assuming you charge up at home for a rate of 14p per kilowatt-hour. This is compared to around 12p per mile for an equivalent petrol-powered car.

Once the battery has run out and the engine kicks in, you may find the fuel consumption slightly higher than a conventional hybrid or non-hybrid car.

What’s the difference between a hybrid and a plug-in hybrid?

A hybrid car has a much smaller battery than a PHEV does, meaning it can be charged up by the engine or by the energy recouped as the car coasts and brakes. A hybrid can only do very short distances on electric power alone, usually around a mile, meaning they make more sense in built-up areas where you’ll be in stop-start traffic a lot.

A plug-in hybrid is the same concept but with a bigger battery pack that can be plugged in to charge up. This means it can go a lot further in electric-only mode.

What’s the difference between a plug-in hybrid and a fully electric car?

A fully electric car doesn’t have any internal combustion engine on board. It relies solely on batteries that need to be plugged in to charge up, unlike a plug-in hybrid which has an engine as  backup to take over when the batteries are depleted.

If you’re looking to get a great deal on a PHEV, then click here to compare models with carwow. Or, if you can’t decide what car you’d like next, click the button below to get help choosing the right car for you.